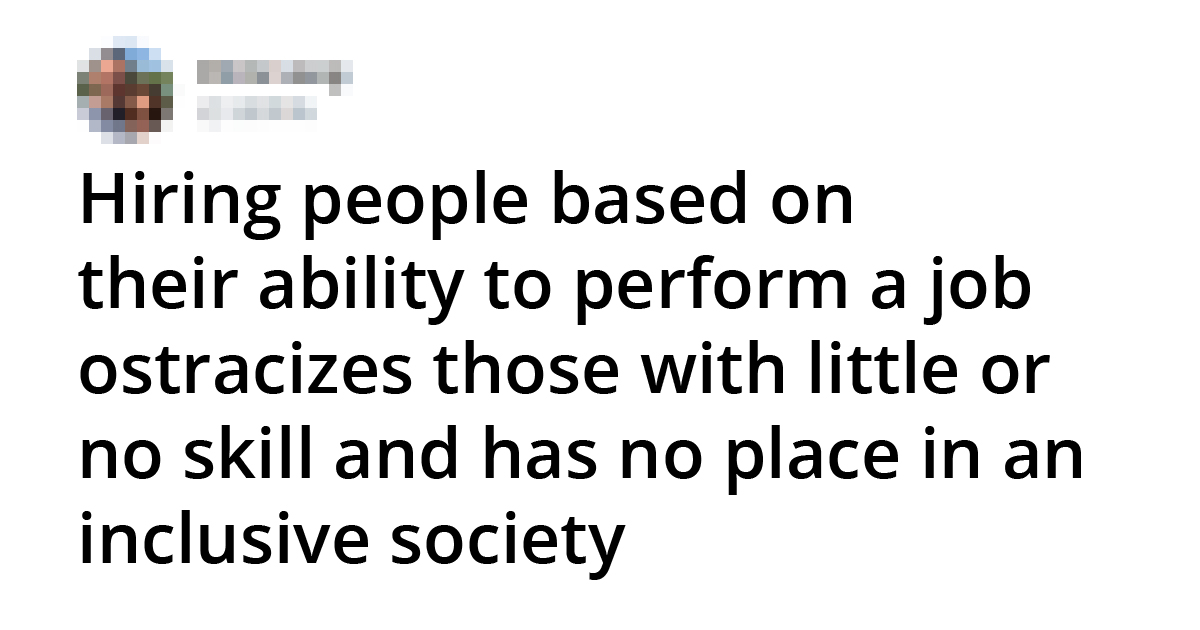 Man Says Skill-Based Employment Is Not Inclusive, And The Internet Reacted

There are indeed entrepreneurs like Bill Gates and Steve Jobs who were college dropouts. The lack of diplomas does not mean they lacked in skills – they gave it all into raising their own IT companies. Today, there isn’t a single person on earth who uses a smartphone or computer that doesn’t know what Microsoft or Apple is.

A social media user shared that he thinks hiring people based on skills is… non-inclusive.

The tweet quoted reads, ’employing people based on their ability to perform a job.’ It does not say qualifications, educational background, or similar things. It reads your ‘ability to perform a job’ which refers to practical skills. In other words, an employer should be willing to employ people who have no idea what they are doing yet and provide the training for it.

The internet, however, couldn’t believe this to be real.

People are confused. How do you hire people without evaluating their skills? Interviews and on-site tests are meant to measure a candidate’s skills and find the best person to fit the job. Yet, the user who tweeted may have thought it wouldn’t be fair for people who have no skills to compete with more experienced people.

But that’s the whole point of screening and interview tests, right?

One person put this into the perspective of an entry-level job seeker.

We get this person’s point very much. It makes sense – the ads these days will read ‘entry-level’ and then expect people to have 1 to 2 years of experience in the field. That doesn’t make sense unless that person had taken an internship, which is not the case for many graduate students.

But there are jobs where employers do hire inexperienced individuals. They are mostly part-time jobs, but specialized jobs would require hired individuals to have the basic knowledge. A company is NOT required to pay their new employees while still training them basic knowledge that other candidates had earned proven from their certificates.

Don’t worry too much: most employers aren’t really serious about it!

Jaclyn Westlake recommends people to think of job requirements as a ‘wish-list.’ When it comes to experience for ‘entry-level’ positions, Jaclyn explains that they are more of a “nice-to-have” than a “must-have” point.” But when the influx of applicants is high, some employers would immediately screen based on experience.

The former HR manager of a decade long added, “If you meet at least 80% of the requirements listed in a particular posting, don’t overthink it—just apply.”