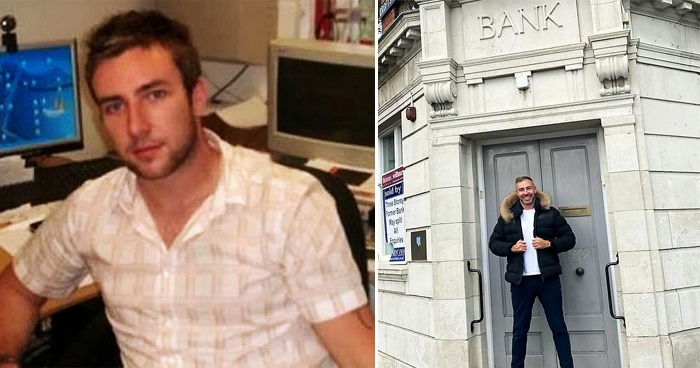 A businessman who has declined a start-up bank loan for being too inexperienced has officially bought the same bank for himself 18 years after. 39-Year-Old Adam Deering in 2002, was broke when he was declined the sum of £10,000 by the manager of his local RBS Branch in Urmston, Great Manchester.

Working from the floor of tiny office space, Adam couldn’t purchase his own desk and chairs, but the determined entrepreneur did grow his deb management office from the ground and sold it for £5million in 2014. Currently the head of 5-multi-million pound businesses, the business Tycoon has got perfect revenge, splurging £450,000 on the building that once dashed his dreams.

‘I had to quit my job as a salesman at age 21 because I wanted to create a successful business. But then, I didn’t have a penny to my name so I needed a bank loan. I presented a detailed business plan and requested for £10,000, but the bank manager didn’t take me seriously.’  Mr. Deering explained.

‘I placed my heart and soul into the business plan and I can recall that my fingers crossed under the table as I nervously waited for the manager. I was distressed when she said I was too young and inexperienced, adding that there was no way they could take the risk. Without the required money, I spent 4 months cold calling people from the floor of a tiny space because I couldn’t buy a chair or desk. Those early months were difficult, but I refused to give up and now it paid off.’ Deering added.

Apparently, Mr. Deering’s determination and hard work did pay off, and drawing on his personal experiences, he’s also inspiring others as a motivational speaker. Holding a property portfolio worth millions of pounds, Mr. Deering will, however, oversee a £500,000 renovation of the bank as it’s intended to be converted into eight apartments and a retail unit.