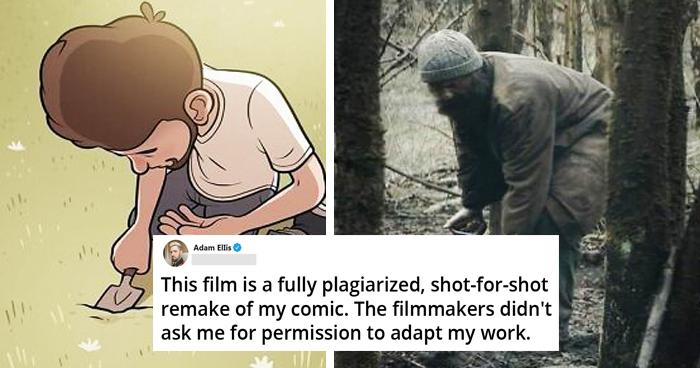 It is never pleasant to find out that a great movie was actually plagiarized from someone’s original idea. Many of these perpetrators, however, would sometimes straight-up deny things. Others prefer to use words like ‘inspired from.’ But when a story was copied shot-by-shot literally off a comic strip, one doesn’t have to be a legal expert to call that plagiarism.

This is the situation that Adam Ellis is facing. The illustrator, who’s more popularly known as Adamtots, raised his plagiarism case to social media exposure when he found his story being made into a film without his consent.

Early January, Adamtots revealed that ‘Keratin’ was based off one of his comics.

Adam makes hilarious comics, but he would make these dark, breathtaking stories that explore the darkest sides of humanity from time to time. One of those comics was about a man who decided to plant something in his spare time.

The movie looked exactly the same shot-by-shot with Adam’s comic.

Adam continued by tagging the emails that were sent to him. The date on the email shows that this has been an ongoing issue for the past few months between Adam and the filmmaker.

Laurie Mahon, the producer, explained, “It takes some influence from your work on a previous Instagram comic strip. Adam, we have credited you in our short film as an influence upon our work.”

The email also read that the film was on tour and playing as part of the BAFTA and OSCAR qualification. When the email was sent, they’ve already played the short film in five different places. On top of that, they also inquired if Adam would be interested in watching and promoting the movie.

In an interview, they simply revealed that they were inspired from a short online cartoon.

However, the short film was obviously a complete adaptation, or should we call, plagiarism of a previously existed comic strip drawn by Adam Ellis.

To Adam, the comic was a “deeply personal” creation that he made after leaving his day job. Ironically, he left the job because of issues over the ownership of his personal work. The very same comic that made him feel better after quitting that was later plagiarized.

The filmmakers have also ceased any communication with Adam.

“Upon discovering this, we immediately reached out to Ellis to discuss the matter further (via Instagram DM) and to Butler and James (via email), asking them to clarify the situation,” they explained.

However, Keratin’s production team has refused to comment and finally removed their interview from the site. Director’s Notes has also denied any connection to the movie’s creation and is “regretful to have used our platform to help promote the film.”

“We take our work here at Directors Notes extremely seriously and it has always been our mission to provide creators with the recognition they deserve. While we had no reason to believe that Keratin was an uncredited reproduction, we unreservedly support Ellis’ right to challenge the unauthorized exploitation of his work,” the statement concluded.

People are rightfully angry at this situation.