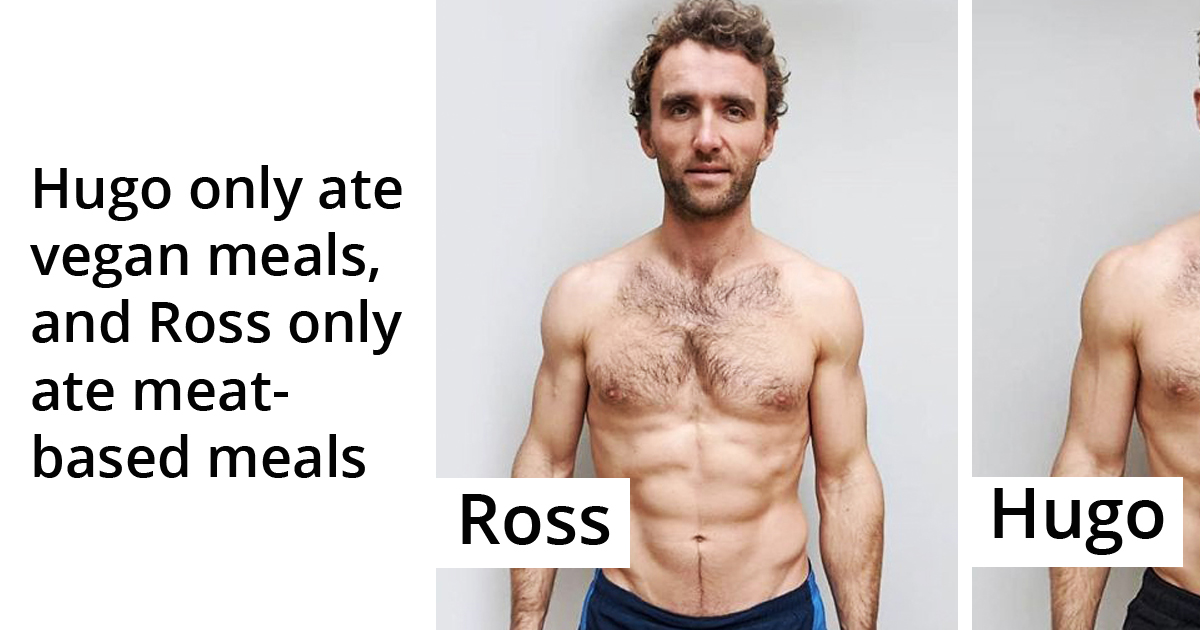 The Turner Twins, Hugo and Ross, have climbed a mountain and trekked to the most inaccessible points on every continent, all in the name of research, charitable causes, and wanderlust.

As part of the study, both twins underwent endurance training at the gym five to six times a week, using a program designed by Ross, a personal trainer. They also ate an almost identical number of calories in meals prepared by the Mindful Chef delivery service.

For their latest adventure, the brothers ventured to explore the world of diet. Aiming to compare the effects of a vegan diet to an omnivorous diet on two genetically identical individuals.

Over a 12-week fitness program from January to March, Hugo ate only a vegan diet, while Ross ate an omnivorous, but meat-heavy diet. The pair monitored how they felt during the course of the experiment with the help of researchers from King’s College, who tracked basic health metrics like weight, cholesterol, and muscle mass.

The pair was inspired by the growing popularity of vegan diets among professional athletes.
“We wanted to take bias and opinion out of it and takedown to the genetic level. We can get science involved because we’re twins and genetically identical, so we can compare ourselves in extreme environments,” Ross said in an interview.

By the end, they noticed some big differences in terms of muscle gains, fat loss, and digestive health.

Example of Hugo’s vegan meals. The foods had similar amounts of calories

After 12 weeks of a vegan diet, Hugo reported higher and more consistent levels of energy. He felt significantly more alert during his lunchtime gym sessions, compared with his typical routine, probably because his blood sugar levels didn’t drop as often as they did before. After about a month on the vegan diet, he said he had dropped nearly nine pounds On a vegan diet.

Hugo’s mental focus was also much better due to the same reason. However, there were some negative side effects as well.
“I just lost it — I really don’t know what happened,” he said, adding that his experience may not be true for everyone.

Hugo ended up loosing 4 pounds of body weight, and has trimmed his body fat down to 12%

Ross started smaller with 175 lbs and had gained 10 pounds of muscle; 4 pounds of fat, ending up weighing 189 lbs

Ross has always been the slightly bigger of the brothers, and this was exacerbated by the experiment. His blood cholesterol levels remained consistent during the 12 weeks. From starting around 13% body fat, he put on 10 pounds of muscle, in addition to just over four pounds of fat.

The twins discussed the results

Scientists also collected fecal samples before and after the experiment and found out some other interesting things. For Hugo, the dietary change was even more significant, since his usual animal-based protein was swapped out for things like tofu, and jackfruit. As a result, his gut microbiome — the populations of beneficial bacteria that live in the human digestive system — also changed in some interesting ways.

Surprisingly, both Hugo’s and Ross’s gut microbial diversity had been affected differently due to their diets

Turns out Hugo’s gut microbiome has gained more resilience towards chronic illnesses like type 2 diabetes and obesity, which proves that vegan diets help reduce these risks by helping the microbiome. But to their surprise, both brothers saw a decrease in their microbial diversity or the number of different bacteria species present in the gut. That’s generally linked to less resilience against some types of chronic illness such as Crohn’s disease.

Although Ross’s, the omnivore’s, microbiome changed only slightly, it remained much more consistent than Hugo’s, the vegan.
The brothers said they’ve learned a lot and plan to incorporate more plant-based eating in their lifestyle. The brothers are known for their endurance expeditions and want to test how vegan eating might benefit them on their treks.
“Having a vegan diet has benefits and so does eating meat. I don’t think either outshone the other here,” he said. “We’ll be doing a mix of both, having non-meat days and adding more vegan foods into our diet, eating better-quality meat, and less of it. We’ve taken away the best of both worlds.”

In the aftermath of the experiment, the twins admitted 12 weeks wasn’t a long time for a typical dietary study. They would want to make the experiment longer if they attempt it again in the future to get more definitive results. The brothers said they’d prefer to do a similar study of the diets for six months to a year for better data.

The brothers agreed to incorporate more plant-based diets in their lifestyle.