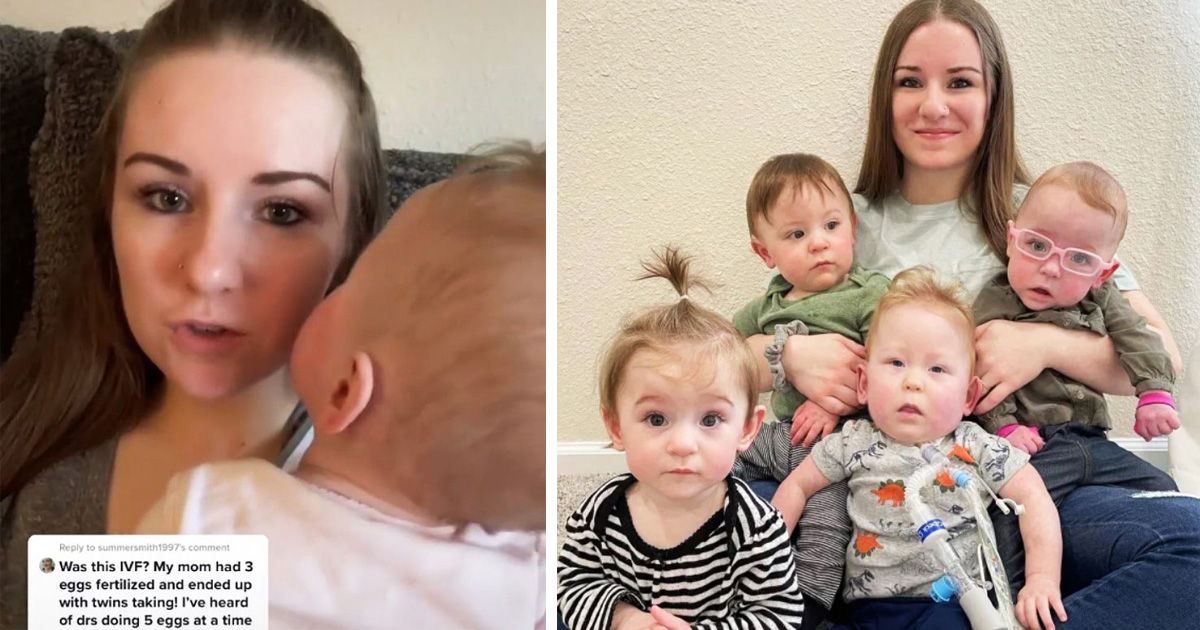 ‘I Thought I Was Infertile, Then Got Pregnant With Quins Naturally’

Hannah Merton was sure that she was infertile, but now, she’s a popular TikTok mom who shares cute moments of her family of six regularly! Now a mother-of-five, she shocked her followers when she told them that she had them naturally.

She and her husband were shocked when they went for an ultrasound and found out there are five babies in her.

“Was this IVF? My mom had three eggs fertilized and ended up with twins taking! I’ve heard of Drs doing five eggs at a time, though, and all taking. Wow,” a follower commented.

She decided to take the chance to address what was going, “I wanted to address this comment because I’ve gotten it so many times. Everyone thinks or assumes or asks if it was IVF. No, it was not.”

“I took a medication called Letrozole, and it was just to help me ovulate, and boy did I!” she revealed her secret. “The chances of that happening are not very high, though. Our chances for [twins] they told us was 10%, and triplets was 1%. So needless to say, we were shocked when we had five.”

She wanted to keep all five, but Hannah shared that their happy days were also clouded with mourning.

Meredith, her smallest baby, passed away at three days’ age. She recounted, “She had very, very premature lungs. But her tiny 1lb 4oz self put up a fight. Jake rushed over to the NICU to give her a name and be with her while I was in recovery.”

“I called and spoke to her on the phone. I told her to fight as hard as she could because I needed her, and I told her over and over again how loved she was.”

She recounted her story with details in another TikTok.

“And then, on day 2 of her life, I believe, she had a collapsed lung. So she had to have a chest tube put in. And then, that night, they decided they were gonna do a head ultrasound in the morning. Because despite several blood transfusions, she just wasn’t having a high enough blood count.”

“So she ended up having a great forebrain bleed and several enlarged ventricles. That afternoon, she passed away.”

“Our lives will truly never be the same,” said Hannah remembering the incident.