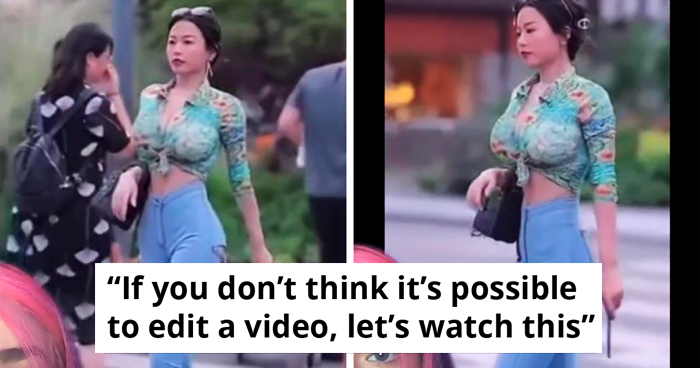 ‘How Damaging It Is To Young Minds’: Girl Exposes Fashion Influencer’s Edits In A Viral Video

We are all aware that photo manipulations are going on in the media. Most photos as shared on social media, particularly Instagram, go through filter editing and manipulation. It has since become evident in the mainstream media, with celebrities and influencers regularly sharing photos of themselves that are heavily edited and far from reality.

Recently, a TikToker exposed a fashion influencer for editing their bodies to look more like society’s expectations or standards. With the username @residualdata, Sophie has racked over 2.3M views in her video, which showed a woman crossing the street, but something doesn’t sit quite right. Sophie aims at spreading awareness about video editing technology that lets users change their shape even without people noticing it.

Many people, including Sophie, are reiterating how social media photos and videos can harm us.

“If you don’t think it’s possible to edit a video, let’s watch this. So this video is viral on Chinese TikTok, and somebody posted it on here. It got, like, 7 million views and 1 million likes. In the comments, many people knew this was edited, but a lot of people didn’t. So I thought I’d point out the edits, so it’s easier for you to identify. So you have to look at the background and notice how the green pole wraps around her body.” Sophie said in the now-viral clip.

Recently, she went viral for exposing a popular fashion influencer for editing her body in a video.

Initially, the clip got popular on Chinese TikTok, Duoyin. Sophie brings our attention to a detail that lets us know that the woman’s body was indeed enhanced. Expectedly, you will have to take a close look at the straight lines in the background of any video, but if they are warped, it’s a clear point that the image was manipulated. So in Sophie’s clip, you will see that the green pole isn’t completely straight.

The video showed a woman crossing the street, but Sophie claims she doesn’t look like that in reality.

do you think your fav influencer have access to this tech? ##retouching ##beautystandard ##bodyimage ##videoediting ##CODAduets ##StyleSnap

Sophie added that such types of edits are common in Chinese street-style videos. But she intended to talk about it because technology is getting so sophisticated that people can’t even tell when something is done to a photo or video. She insisted that it’s damaging as it gives an unrealistic image of what a human body or face should be like, which of course, can lead people to feel less attractive and dissatisfied with their appearance.

Photo or video manipulation is damaging to young minds as it gives an unrealistic image.

She concluded: “This software has gotten so sophisticated that it’s hard to tell. But there are things like that that give these things away. Now, these kinds of edits are super common in these Chinese Street-style videos, which is a separate conversation. I’m using this to show you how sophisticated this technology is and how hard it can be to decipher these edits. Seeing is unfortunately not always believing, and you never know who might be using this.”

Sophie drew her audiences’ attention to a pole that looked warped; this means the woman’s body was manipulated.

Nonetheless, many people backed up Sophie in the comments, noticing how the proportions of the woman’s body were completely unrealistic and how editors will elongate their bodies to make them slimmer and taller. On the other hand, this isn’t the first time Sophie has called out popular influencers for editing their bodies. She had shared a clip of Kim Kardashian having a filter on while hoping nobody would notice. Well, she got caught, and here’s the video below:

Sophie had earlier called out Kim Kardashian for having a filter on in one of her videos. Here you go!

Here’s How People Reacted In The Comments