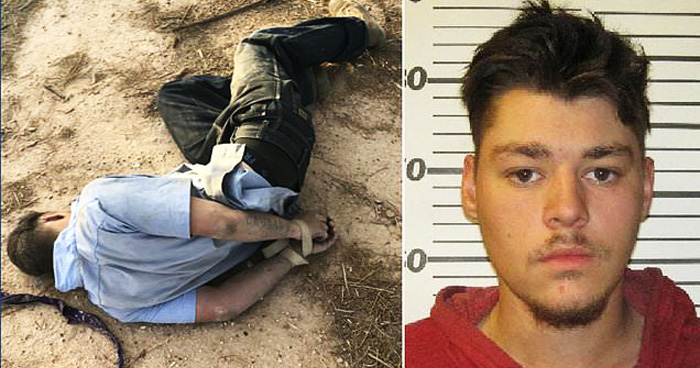 Guy, 19, Who Found Tied Up Faked His Own Kidnapping To Get Out Of Work

We (humans) tend to bend a few rules at work, including taking extra minutes onto lunch hour or sneaking home things from the office supplies. But of course, if there’s anything you need to careful of at work, it’s you faking up situations to get out of work.

Recently, an Arizona teenager felt he could fake his kidnap to get out of work, but unfortunately, it hit right back at him. 19-Year-Old Brandon Soules has had his hands tied using his belt and a bandanna stuffed in his mouth in Coolidge.

Brandon Soules, 19, a tire employer in Coolidge, faked his kidnap to get out of work.

He reportedly informed cops that two masked men knocked him unconscious and kidnapped him before dumping him near a water tower. Eventually, the police found no evidence of the crime even though Soules had told them he was kidnapped because of money his dad had hidden around town. But Straightaway, he confessed faking it to get out of his job at a Tire Factory.

‘He informed us that he at first stuffed a bandanna in his mouth, and afterward, he took off his belt and bound his hands with his belt. And laid on the ground and scooted out to the side of the road where somebody could see him and waited’ Commander Mark Tercero told ABC.

Soules had his hands tied using his belt and a bandanna stuffed in his mouth.

The officers claim they became suspicious of the event, having checked the surveillance footage from around his home. Specifically, he was found by the police on Feb. 10 but was arrested on Feb. 17 for false reporting. The Coolidge Police Department has since released a statement but didn’t tell an attorney who might be commenting on Soules’s behalf.  Nonetheless, photos of Soules laying on the ground, tied up after a passer-by found him, have been released by the cops. Similarly, Soules has officially been fired by the Tire Company.

The Coolidge Police Department has released a statement but didn’t tell an attorney who might be commenting on Soules’s behalf.