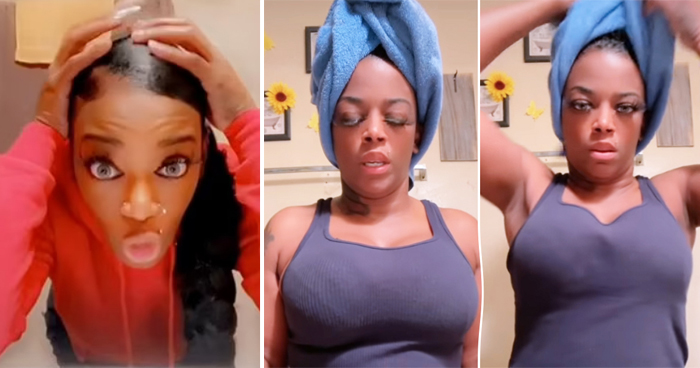 You probably don’t know w hoTessica Brown is, but you definitely know the Gorilla Glue girl. Yes, the girl had to get a surgeon’s help after she used industrial strength glue to keep her hair in place. But that’s all in the past, and you’d think she’d learned something from that.

The 40-year-old has been wearing wigs and sharing updates on how proud she’s with her hair growing out healthily.

People couldn’t believe that she’s done it again with her hair, although it might not be entirely her fault this time. She explained, “I decided that I was gonna start wearing my real hair, but when I looked at it, you know, I had a gray hair here, a gray hair there.”

She’d thought that her hair was ‘strong enough to take chemicals.’ But soon realized she was very wrong.

She tried using a box of hair dye from Revlon but felt a burning sensation on her scalp immediately after application, her manager Gina Rodriguez explained. She immediately tried washing it out, but her hair was already falling off as she was rinsing the dye off.

She showed clumps of hair that had fallen off, then proceeded to comb her hair to show how they were falling off for real.

It appears that the dye had reacted badly with the chemicals used to remove the permanent adhesive that caused her hair to melt.

She plans to go to Pasadena for PRP shots at LA FUE Hair Clinic after getting stem cell therapy, and if it doesn’t work, she’ll have to “shave her head and start over.”

Will she be able to save her hair? Or will she have to start over?