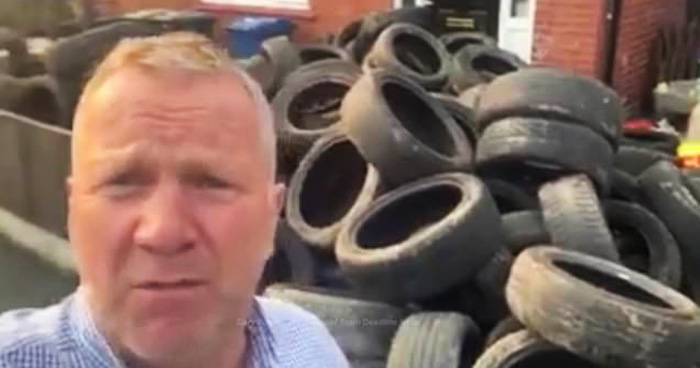 Farmer Fed Up With Fly-tipper’s 25th Offense, Dumps Back 4000 Tires On His Land

Nobody likes seeing people throwing away craps on their land. Why can’t you throw it out properly like every other decent human being? My land is not meant for you to dump tires on freely.

Stuart Baldwin is a 56-year-old livestock farmer and had been fly-tipped 25 times in a year. That’s more than twice a month.

He decided to put up a CCTV and track the person who dump them down.

Speaking to DailyMail, Stuart said, “Flytippers are always dumping on our farm, it probably happens 25 times a year. It’s tires and rubbish you get all sorts. I just thought ‘I’ve had enough of this’.”

So he made a plan.

“We put a camera up and he came back with some tyres and we just got him. My daughter put a picture up on Facebook and we tracked him down.”

Megan Baldwin, pictured below with his brother Joel, is the lady who went into social media to find him.

Stuart wasn’t immediately offensive. He confronted the man and they had a conversation.

“He came down and he said he was going to move them so I gave him the benefit of the doubt and a couple of days breathing – but he never moved them. I thought he must have forgot so I took them back to remind him.”

But as most of you can guess, this man didn’t appreciate the nice reminder.

Stuart didn’t put up with it for long. Three days was it, “You get people like this – they’re vermin. People in the community have called me a legend and a hero. Hopefully people will think twice now about dumping on our land.”

On an amazing turn of event, he owns SED Services Ltd, a recycling company for green waste that recycles them into stuff like compost. Meghan said, “It came to last night and he still hadn’t collected his tyres. So we decided to deliver them back to him.”

“We wish no harm to him or any property hence why we will placed them in his garden without causing any damage.”

His friend Gary Rothwell happily recorded the course of event and the video of the revenge went viral quickly. Stuart said in the video, “We have come to my land at Haydock and somebody has put these tires here overnight.”

The house of the unsuspecting fly-tipper.

Spot where tires were dumped irresponsibly after it’s cleaned up.

Stuart dumps the whole tires with his truck as it reverses to his front lawn.

Eight men carried and threw the tires onto his front garden, in an effort to execute a revenge that doesn’t damage anything or hurt anyone. “I got about to 421, but there might be a bit more,” Stuart spoke in the video.

“Done now, given them back, so thank you.”

People now hail him as hero and the man is said to have left the home according to his ex.

People jokingly commented that he must be glad to have found them tires again. He must have been worried sick where to find his 400+ tires! People hail Stuart Baldwin as a hero with many people complaining about fly-tippers ruining their days.

Moral of the story: do not fly-tip, especially not on Stuart Baldwin’s land.