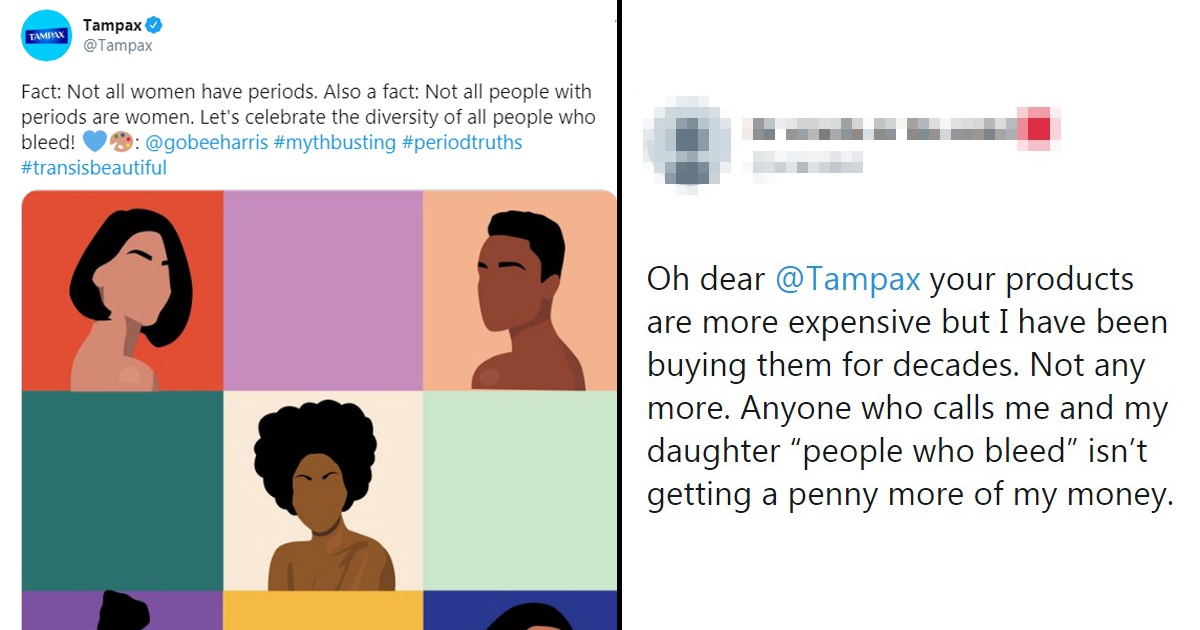 What is going on with this world? Nobody understands it anymore. As we are all locked at home with only our devices and the internet for entertainment, there has been countless drama in the virtual world. As if people have lost their filters, companies like Tampax are walking on eggshells.

Recently, Tampax sent a tweet to ‘celebrate the diversity of all people who bleed.’

The tweet’s idea was to include trans-people who may still experience periods despite their gender. Some people identify themselves as non-binary or genderfluid. Hence, Tampax wrote, “Let’s celebrate the diversity of all people who bleed!” with a blue heart.

But the message has not been well-received by feminists who said this tweet is ‘erasing’ woman’s presence. But others are thanking Procter & Gamble for their effort to be inclusive towards everyone else.

But the feminists are getting offended and boycotting the company.

It appears that the base argument for disagreeing with this tweet was how it refuses to admit that women, their base market, are the only ones who have periods. By dismissing this, Tampax is deleting women’s existence and presence and their impact on society. Only women have periods, and this experience that is gender-exclusive should never be denied.

Multiple tweets continue to press on that since the dawn of human civilization; it has become a known fact only women menstruate. That if men find themselves bleeding from their genitals, they should quickly find a doctor for help. Those who side with science only identify two existing genders, while others think this inclusivity is important.

The same opinion was being voiced by JK Rowling, who insisted that only women experience periods earlier this year. Simultaneously, she received backlash, labeled as ‘transphobic,’ and claimed to have been sent death threats from the trans community.

There are those who thank Tampax for this.

Several people label the feminists as ‘transphobes’ with how they are reacting negatively to the tweet. They pointed out that these people are TERFs, an acronym for trans-exclusionary radical feminists. Many trans came out to defend Tampax, along with several women who don’t think they feel erased by the ad.

Tampax is just right behind Superdrug after their ‘people who menstruate’ product, LUNA. It was meant to be inclusive for everyone and avoided the term ‘woman’, very similar to what Tampax did.