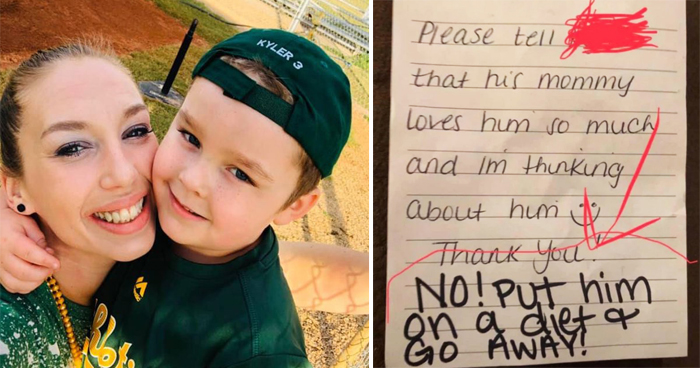 A mother from Texas made a daycare worker fired from her place after receiving a rude message from her. Francesca Easdon took her anger on Facebook, where she shared a picture of the harsh message.

As usual, Kyler went to the Rocking Horse Day Care, and his mom had him bring a lunchbox.

Parents sometimes love leaving surprises for the kids or messages for daycare workers to pass them along with a message that they’re loved even when they’re not together. Francesca had previously also told the institution that she was making changes in Kyler’s diet.

But since Kyler is a picky eater, she’s working on changing his lunch with healthier choices that he’ll like.

She left a note for the person in charge of helping him eat this loving note. But to her surprise, she got the note back with an aggressive reply.

She revealed that she and the daycare worker had had a bad exchange, but there’s no reason to involve the little boy in their spat. Regardless, the daycare worker did something Francesca was not willing to let go of. She took the matter with the facility.

After inquiring the worker directly, she admitted, but she didn’t seem remorseful of her act at all. She was fired.

The mother has also shared several inappropriate posts made by the daycare worker on Facebook, but the facility chose to ignore them. Eventually, Francesca moved her boy to another daycare center, even though it was more expensive.

But she’s just like any other parent who thinks it’s worth it because “Kyler’s safety and level of care comes first.”