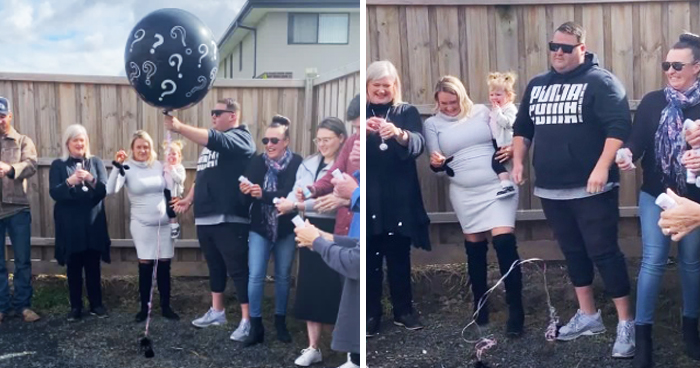 Be it a girl or boy, a child remains a child! Well, this isn’t the case of Matt, an expectant dad who realized he would have a girl instead of a boy. Matt’s disappointed gesture has sparked an outrage online, having shared the clip of the gender reveal party on TikTok under the username @matthb92.

TikToker Matthb92 has come under fire for his disappointed gesture amid a gender reveal party.

In the clip, Matt and his partner were surrounded by their friends and loved ones, all of which were excited to know the sex of the unborn child. When the time to pop the balloon emerged, Matt held it firmly as his partner pops it with a pin: Pink balloons, confetti, and string appeared, revealing it’s a baby girl.

While the family and friends gathered celebrated to the news, Matt threw the popped balloon on the floor and muttered something that can hardly be heard. So far, the clip has garnered over 6k reactions, and people are left divided with opinions. “Don’t worry. Your daughter won’t want you either.” One user wrote.

Matt had expected a baby boy, but when pink balloons, confetti, and string emerged, he knew it was a baby girl.

Another added: “His daughter is going to be heartbroken when she sees this when she is older. Whatever biased opinions should disappear when you are having children. A few people stepped in and defended Matt, saying there’s nothing wrong with having a preferred gender.

A few TikToker have defended Matt’s reaction, saying there’s nothing wrong with having a preferred gender.

“At least he’s honest; every man wants a boy if you already have a girl.” A third stated. While a fourth said: “Just because he was disappointed doesn’t mean he’s going to love the baby any less.” However, others saw a hilarious side to the subject matter. What do you think?