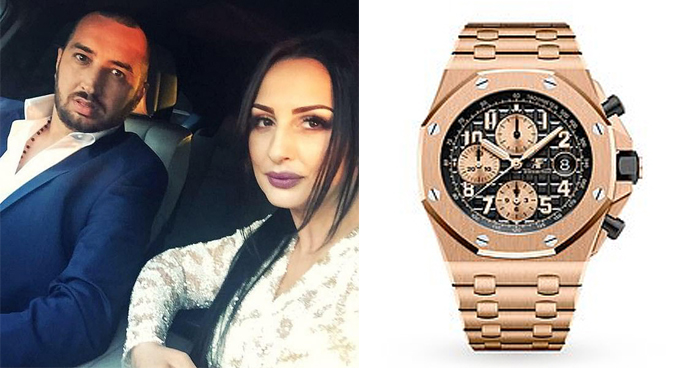 Couple Used Their Son, 6, To Help Steal A $87k Gold Watch From Harrods

A Romanian couple used a six-year-old son in a sleight-of-hand ruse to steal a £67,000 watch from Harrods, a court heard. Ilie Para and Marta Para-Bloj, both 33, swapped the luxury Swiss watch with a fake that they had hidden in the hood of their son’s coat.

A few days ahead of their planned theft, the couple had scoped out the luxury retailer, based in Knightsbridge, central London, taking several pictures of the Royal Offshore Oak 18 carat rose gold watch while on display. On 19th September, the couple returned to the Brompton Road store accompanied by the six-year-old boy posing as potential buyers of the luxury timepiece.

All along, the sales assistant attending to the couple was oblivious to the theft in progress. When he turned his back on them, Para quickly swapped the gold watch with a replica hidden in the boy’s hood.

Everything was seemingly fine afterward until the next day when a colleague noticed the watch’s dial was different, and it was missing its serial number. It was then that the authorities were alerted of the incident.

They Scoped Out The luxury Retailer, In Knightsbridge, Central London,

Days later, the police caught up with the thieving couple in their black Audi at Dover’s port, attempting to flee the country. Judge Michael Grieve, QC, who presided over the case, asked who the third person listed in the police report as being in the car, and was told it was the young boy.

‘I did wonder why someone who was instrumental in the commission and present in the offense hadn’t been arrested,’ he said.
Prosecutor Dominic Hockley said the couple was at Harrods five days before the theft.

‘They walked around the store going through numerous watch boutiques, and they eventually settled on the AP concession stand. ‘A member of staff brought them the display to try. ‘Ilie Para tried a few of those watches and then proceeded to take his photo and photograph one particular watch at all angles. ‘One of the watches was an 18-carat rose gold Royal Oak offshore self-winding chronograph worth £67,400,’ the prosecutor said.

‘They then departed Harrods in the same vehicle. The Crown says this was plainly a reconnaissance mission. When they found the watch they were interested in, they took photographs, no doubt intending to obtain a realistic replica.’

‘We say this has shown planning and sophistication,’ said Mr. Hockley.
‘The couple said they didn’t like the other watches. They wanted the Royal Oak offshore. When the sales assistant took the other watches and placed them back in the stacks, Mr. Para took off the genuine watch he had been trying on and swapped it with a fake.’

The fake was hidden in the boy’s hood.
‘He immediately placed the fake watch on the display tray,’ said the prosecutor. ‘Mrs. Para-Bloj moved the watches on display around to give the impression they were still looking at watches.’

Later on, when the sales assistant asked for their contact details to process the sale, the thieves got ‘edgy,’ claiming they needed some time to decide.

‘It was a convincing fake, but a fake nevertheless,’ said Mr. Hockley.

Para and Para-Bloj, Hendon, both admitted theft from a shop. They were remanded in custody ahead of sentence on 14 December at Southwark Crown Court.