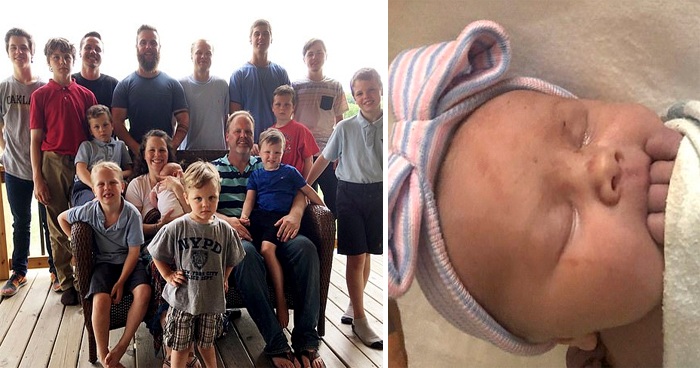 There’s nothing that can make you feel stressed out than trying to conceive a baby girl having had boys in a row. While you must have spent the better part doing all, including eating specific meals – the going gets tough, and it’s naturally normal to experience anxiety. Each time you, however, feel discouraged, take this Michigan family as an inspiration.

‘We are overjoyed and beyond excited to add Maggie Jayne to our family. This year has been memorable in many ways, for so many reasons, but Maggie is the greatest gift we could ever imagine.’ Mother Kateri and Husband Jay Schwandt told Detroit Free Press following their daughter’s birth at Mercy Health Saint Mary’s Hospital In Grand Rapids.

The Michigan couple has been procreating since teenagers. The pair had met as freshmen at Gaylord High School and Gaylord St. Mary’s. Married in 1993, they both had three sons together before graduating from college.

It turned out that both Kateri and Jay earned advanced degrees even with their large family size. Jay owns a land surveying business and a law degree from Western Michigan University’s Thomas M. Cooley Law School. At the same time, Kateri holds a master’s degree in social work from Grand Valley State University.

The couple’s other children include Gabe, Finley, Charlie, Luke, Brandon, Drew, Calvan, Tommy, Francisco, Wesley, Zach, Vinny, Charlie, and Tucker. Tyler Schwandt, the couple’s oldest son, 28, revealed that his parents had believed they would never have a daughter after fourteen sons. He added there’s likely nothing pink in the family’s home in the rural community of Lakeview – 30 miles northeast of Grand Rapids.

Nevertheless, the Schwandt’s have been aired for years on local and national news as their family grew. The family has a live streaming program titled ’14 Outdoorsmen’, which might now be needing a change of name. In all, Kateri claimed that life with such a big family could be messy and chaotic, but they do enjoy it.