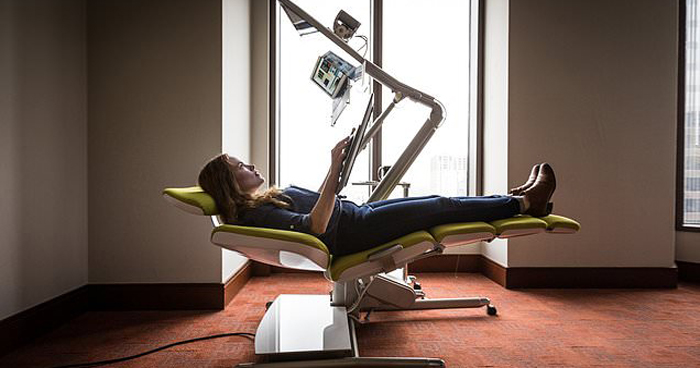 A San Francisco company is in the business of changing traditional office culture. They are trying to convince office workers to start taking on their tasks while laying down with the help of an enormous reclining desk.

the Signature Station desk Created by Altwork, was first released in 2016 and had been retailing for  $5,500. The company recently demonstrated a newer, improved model that goes for $7,600. The fancy desk features built-in plugs and an optional 40-pound spring housing to keep heavier computer displays in place.

According to Altwork, working from your back has the major advantage of improving circulation, which can go a long way to alleviate physical discomfort and therefore improve productivity.

In a new report on the chair, Mashable’s Chris Taylor says the experience of working while lying down isn’t just more comfortable but more productive.

‘Freed of the distracting discomfort brought on by endless sitting or standing — the restless legs, the never-straight-enough spine — your brain suddenly finds itself more able to get on with the business of putting its best thoughts on the screen,’ Taylor writes.

‘Once you get over the panicky sensation that the monitor is about to drop on your face, that is.’

The demo left Taylor imagining ‘hours of productivity in comfort so complete it almost seems illegal.’

To help keep the keyboard and mouse in place, Altwork uses a set of magnets on the underside of its desk to prevent things from falling off.

While there is no sufficient research done on the exact effects of this position, some preliminary studies have shown substantial improvements in cognitive performance.

According to Altwork, working from a standard seated position with your torso and legs at a 90-degree angle impedes blood flow as your hips fold in on themselves.

While lying back with your legs and torso opening to at least a 135-degree angle, blood can move more freely through your body.

Altwork’s CEO Che Voight has said many of his company’s clients prefer the desk to help with medical conditions, including spinal problems, though many choose to leave those details out of their public testimonial about the company’s product.

Researchers have long known that spending significant amounts of time in an upright seated position comes along with serious longterm consequences.

In 2019, a survey of 1,000 office workers in the United Kingdom found that almost half reported regular headaches, sore backs,  while 30 percent regularly had sore wrists, and 15 percent had sore legs.