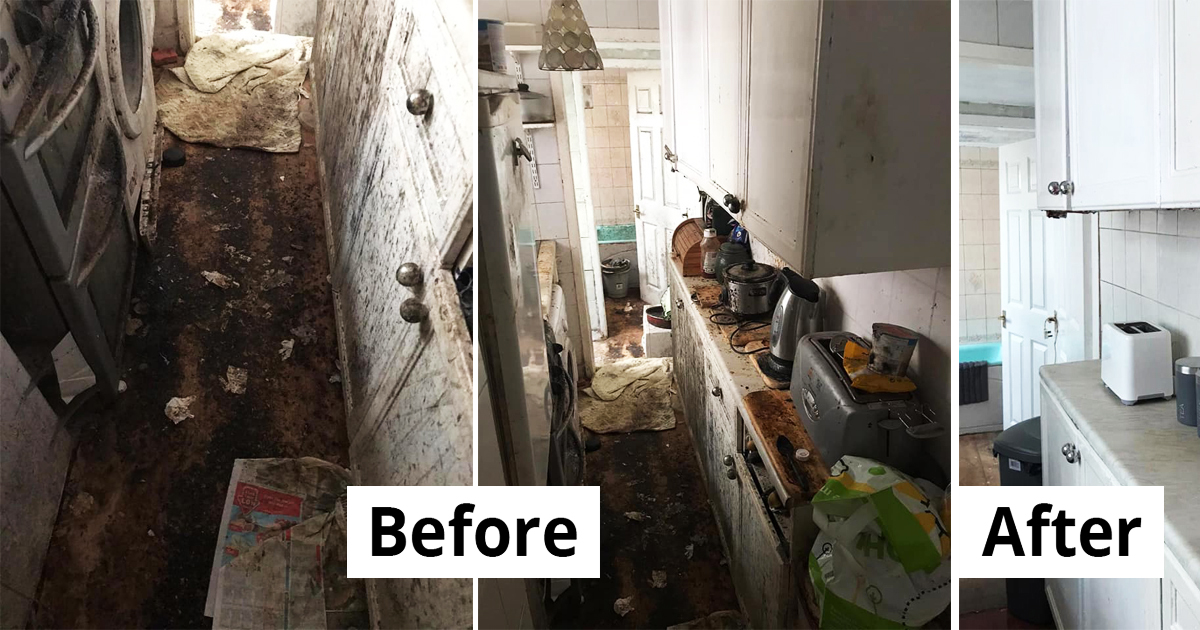 For years, an elderly widow leaves in a very concerning condition in his house in Dalton, United Kingdom. It took him until the situation got so bad that ‘My Kind of Clean’ was called to help him clean. Emma-lea Dalton came with her team for the rescue!

When Emma usually takes aesthetic shots of her client’s home to promote her business, this task appears different. The team got emotional as they helped the man get back up on his feet on clean floors again. She takes pictures of the house’s condition before, during, and after the cleaning.

These pictures are truly shocking.

Emma-lea was interview by The Mail and said, “I really hope that this will help people understand they should not be embarrassed by things like this and ask for help if needed.”

She later described how she approached this special task. She decided to have a good look at the place first to know what she’s dealing with, “It had been lived in for a good few years like this without help for this elderly gentleman. He had hoarded quite a bit of stuff as we had two skips full.”

The situation began to worsen when the man lost his wife and he couldn’t take care of the place anymore. It was in this situation that the man’s friend decided to take action and called ‘My Kind of Clean’ for their service.

Emma-lae explains that it took them 50 hours, or about 8-hour work for six people, to clean the whole place. She emphasized, “There will be other people out there who are in a similar position, and I want them to know they should not feel embarrassed and ask for help.”

“We started as a cleaners that provide extra care for our customers, so it is nice to see that highlighted.”

And the cleaning began!

Watching the home becomes clean and livable is just amazing.

The man’s friend came over to see the results and he was speechless. The woman who’s currently helping the widower said that he’s so happy with how clean his bed is now.

It appears that while some people take a clean and warm bed for granted, there are people out there unable to sleep in one. Several people reasoned that the widower might be facing depression that prevented him from doing anything, including essentials such as cleaning his own space.

The way Emma-lea treats every customer extra is just beautiful. They did not just clean up, but also arrange his things and install the wallpaper here! They gave so many thoughtful touches, and hopefully, this will help the man get back up on his two feet in a warm, clean home.

Don’t be embarrassed. What depression, loneliness, and stress can do to people is damaging. Reach out for ‘My Kind of Clean’ if you’re around the UK for their services. If not, find a friend, hire a service, if it’s too hard for you, don’t be shy to ask for help!