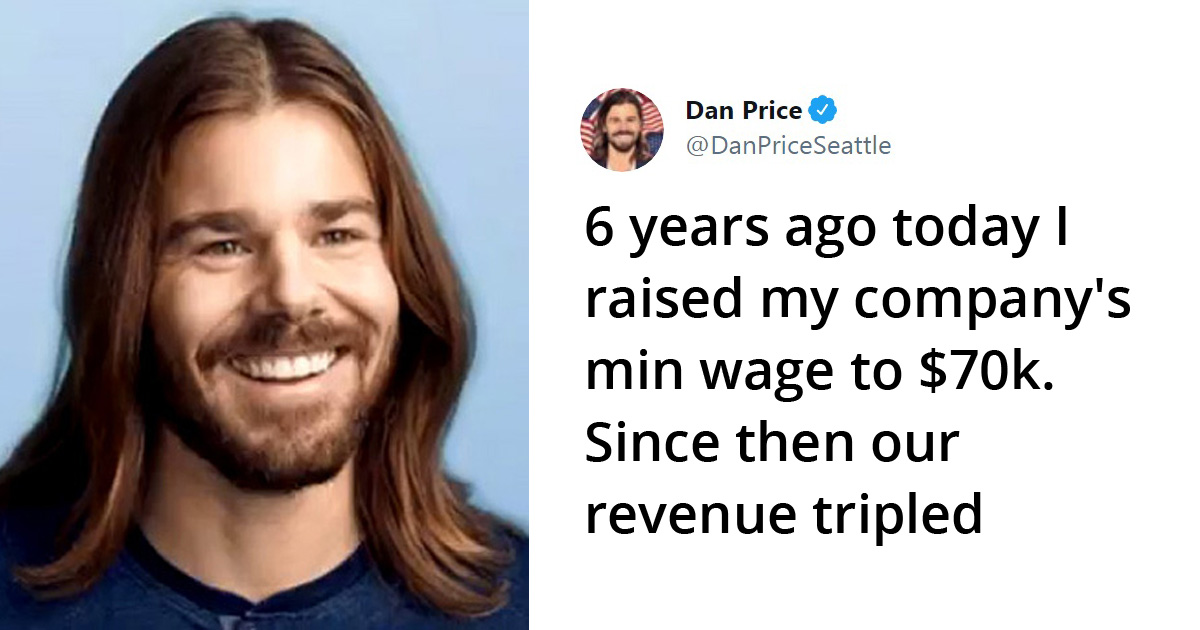 Classes and lessons in Business Management and HR emphasize the importance of people. But there are so few examples out there that truly uphold this idealism. People first, only if you could afford it.

Dan Price raised his employee’s min. wage to $70k by cutting his own salary. Today, he and his employees reap the harvest.

6 years ago today I raised my company's min wage to $70k. Fox News called me a socialist whose employees would be on bread lines.

Since then our revenue tripled, we're a Harvard Business School case study & our employees had a 10x boom in homes bought.

Dan Price runs a credit card processing and financial services company called ‘Gravity Payments.’ The company was established in 2004 and currently has around 200 employees.

It wasn’t always easy, just like every other business out there. At first, he made a huge sacrifice just so his workers could earn the minimum wage they needed. The CEO revealed that he cut his pay from $1.1M to $70k for his 130 employees back then.

That wasn’t the only hurdle they had to overcome. Dan shared, “At the start of the pandemic, we lost 55% of our revenue overnight.”

An employee was secretly working a 2nd job at McDonald's. It was clear I was an awful CEO who was failing his employees. I gave her a raise to quit that job. No one should have to work two jobs to make ends meet.https://t.co/hrgDYUDXYB

“Our employees were so invested they volunteered to take temporary pay cuts to prevent any layoffs. We weathered the storm, paid everyone back, and are now giving out raises.”

Dan proudly announced, “Since then, our revenue tripled, we’re a Harvard Business School case study & our employees had a 10x boom in homes bought.”

I made a lot of personal changes. But I still had savings and made a fair salary. I don't miss anything about the millionaire lifestyle. Money buys happiness when it gets you out of poverty but not when it gets you from well-off to very well-off.

I did this as a private business owner. It affected no one but myself (I cut my salary from $1.1M to $70k) – the definition of private enterprise. But what I did was very threatening to them because it disrupts the narrative of "CEOs must be paid 1,000x more than their employees"

Dan added that 70% of employees paid down debt, homes bought by employees grew 10x, babies had by staff grew 10x, and their customer base doubled.

Dan shared that it was when he found out his employee was secretly working two jobs to make ends meet did he rethink about his workers’ pay.

Dan shared, “It was clear I was an awful CEO who was failing his employees. I gave her a raise to quit that job. No one should have to work two jobs to make ends meet.”

“Fox News called me a socialist whose employees would be on bread lines,” he recalls. In a tweet, he revealed, “When I’ve been on Fox News, the production assistants who led me through backstage confided they were making min wage and struggling to get by in NYC.”

“I asked the hosts (who make seven figures and laughed at me on air) to talk about their workers’ pay on air. They always said no.”