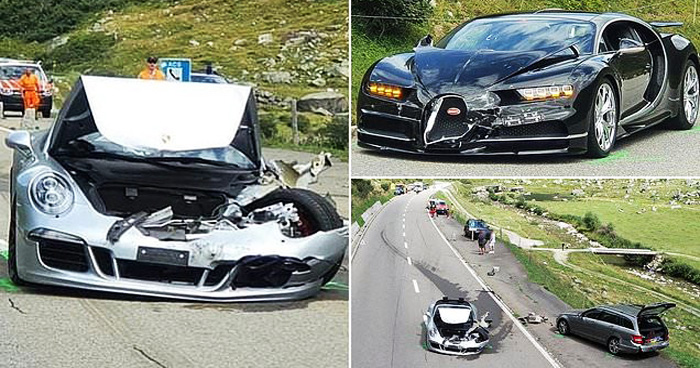 A Bugatti Chiron, a Porsche 911 Cabriolet, and a motor home – Mercedes Benz C-Class Wagon were involved in a huge crash in Switzerland, resulting in over $3.93 million worth of damage. The incident, which occurred along Gotthard Pass in the Alps had four damaged vehicles, with a driver sustaining severe injuries.

A Bugatti Chiron, a Porsche 911 Cabriolet and a motor home – Mercedes Benz C-Class Wagon were involved in a huge crash along Gotthard Pass in the Alps

Four cars were reportedly stuck behind the motorhome while both the Porsche 911 and Bugatti Chiron attempted to overtake at the same time. The two vehicles collided before hitting two more cars amid the traffic holdup. The motor home was moving slowly, causing quite a delay in the moving traffic.

Specifically, the Porsche hit the Mercedes while the Bugatti hit the motor home. The Porsche witnessed the most damage and the Bugatti Chiron witnessed its hood and grille, front bumper smashed. Having both their front airbags positioned, the clip of the incident shared to Instagram has, however, gone really viral.

Nevertheless, Switzerland is recognized as one of the richest countries across the world with its residents owning expensive cars. While the country undeniably does have a reputation for supercars, none of its cities are categorized as the world’s top ten supercar capitals.