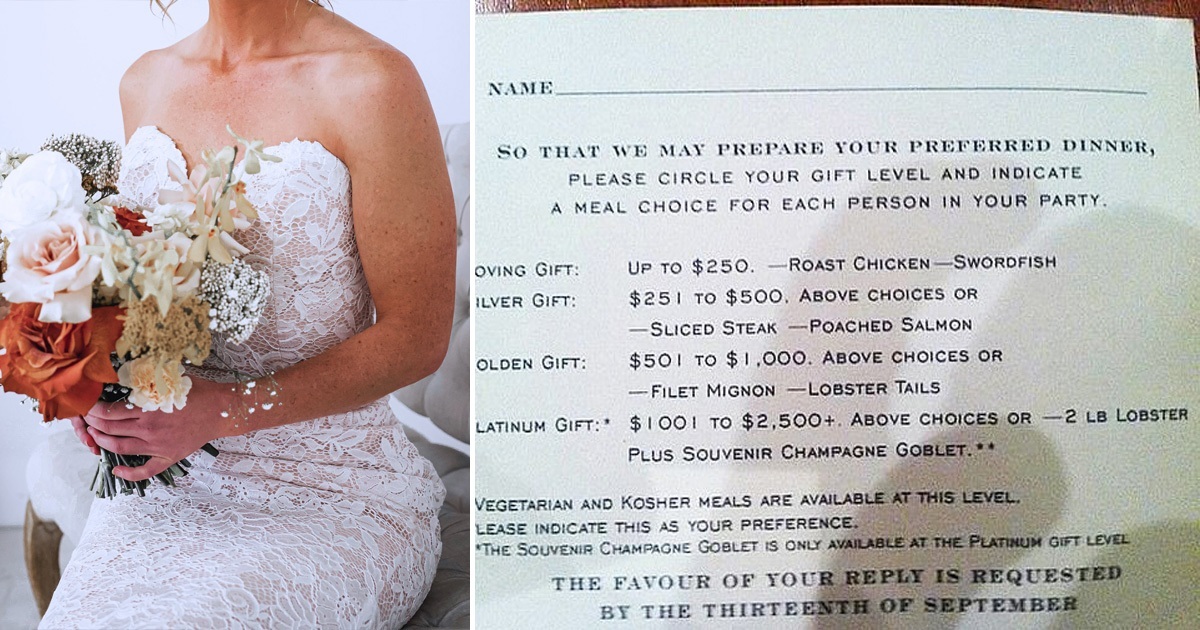 Bride Slammed For Offering Guests Meals Depending On Their Cash Gifts

A bride-to-be was bashed on social media for offering her guests better meals depending on the number of cash gifts they presented on her wedding day.

In a photo of the couple’s RSVP card shared on Reddit’s popular ‘wedding shaming’ thread; Guests were asked to select one of four ‘gift levels’ they planned to give to the newlyweds that would, in turn, translate to their dinner choice at the reception.

In The RSVP Card, Guests Were Offered Better Meals Depending On The Size Of Their Cash Gifts

According to one wedding blog Jersey Bride, the cards were initially sent out alongside the couple’s invitations and were meant to be a ‘joke’ but ended up being shared online after guests failed to realize it was merely a prank.

The couple’s joke clearly backfired after the invitation was widely slammed on Reddit and Twitter, with many calling the tiered menu ‘offensive’ and ‘rude.’

Meanwhile, The fake wedding card classified guests into tiers, the lowest being those who gave ‘loving gift’ – of up to $250 being allowed to choose between roast chicken or swordfish.

The ‘silver gift’ level, which ranges from $251 to $500, offered guests either sliced steak or poached salmon, in addition to the options from lower tiers.
Under the ‘golden gift’ selection, guests had the option of filet mignon or lobster tails provided they forked out $501 to $1,000 worth in gifts.

The highest level was the ‘platinum gift’ reserved for more generous guests willing to spend between $1,001 and $2,500. This affluent class was offered a 2lb lobster as well as a souvenir champagne goblet.

The Cards Were Sent Out Alongside The couple’s invitations As a ‘Joke’ But Ended Up Being Shared Online.

According to the menu, Vegetarians and Kosher guests only had their meals at the ‘platinum level.’

The internet was abuzz with gossip as users mercilessly bashed the couple.
In one scathing tweet, one user wrote: ‘I’m not sure “tacky” covers both the offensiveness of treating your wedding guests like political campaign donors and the pathology of using your marriage as emotionally blackmail your loved ones AND publicly shame them. It’s like a sociopathy burrito.’

Others suggested alternatives for guests to get around the ridiculous tiered gift system.

One user joked about bringing a ‘$25 check and a tuna sub’ instead of opting for the reception meal.

‘Sign up for the platinum level. Get you some lobster. Bring a card with a $5 TJ Maxx gift card and the business cards of local divorce lawyers. Enjoy your lobster and leave. Win-win.’