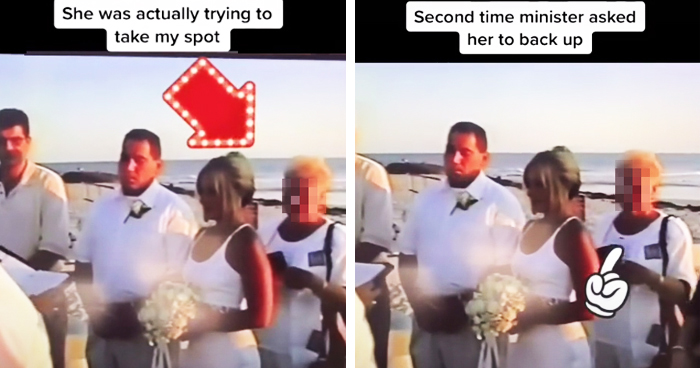 It almost sounds like a horror movie to imagine that your in-laws are already attempting to upstage you on your own wedding. That was what Paula had to deal with on her own wedding that was supposed to be a special, romantic day by the beach.

Paula shared a clip of her wedding day from 22 years ago.

She didn’t just stuck close to her – she was even wearing white for the occasion!

She later said, “The majority of people can totally relate to the frustration of having my future mother-in-law that close to me. I can like feel her presence right on my back.”

“But this was 22 years ago. My girls and I were just watching home videos and we were cracking up.”

The viral TikTok video had been watched more than 2 million times.

Paula later shared that the video was her wedding from 22 years ago. It was very old and she doesn’t mind it as much anymore, thinking it would be funny to share on TikTok. The man is now her ex-husband and she’s gone and found herself a new man since.

Scarier than most horror movies: a case of mama’s boy.

In a different TikTok video, Paula shared that she and the man were supposed to be eloping, and she even had to get ready in the backseat of a car. Her friend helped her change into her wedding dress and they were about to head to the location.

But on the last second, her husband decided to tell her mom!

The thought that she actually only knew they were getting married at the last second and managed to snag a white outfit says a lot about her. She didn’t forget to tag her video with ‘monster-in-law.’