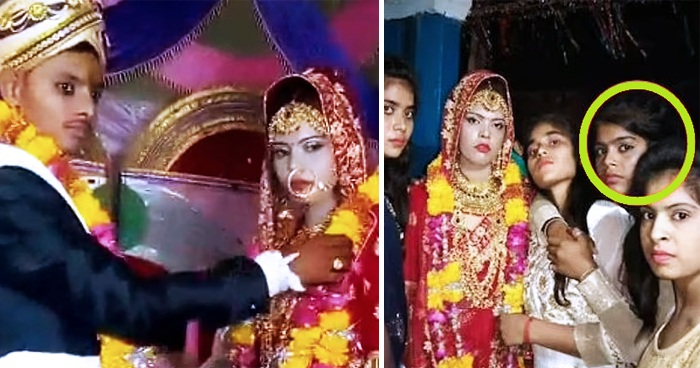 Bride Drops Dead Of Heart Attack During Her Wedding, So Groom Marries Her Sister Instead

In a horrifying incident, a bride’s sister was persuaded to marry the groom after the bride dropped dead of a heart attack amid a wedding ceremony. This incident occurred in Etawah district, Uttar Pradesh, where Surabhi was tying the knot with husband-to-be Manjesh Kumar. Having exchanged garlands as part of Hindu wedding rituals, Surabhi collapsed on the stage of the Jaymala.

Here’s the photo of Groom Manjesh Kumar with his bride, Surbhi, before she dropped dead.

Instantly, a doctor was called to treat her, who, upon thorough checkup, announced her death. Reportedly, the bride-to-be appeared to have died of a massive cardiac arrest that happened right in the middle of the wedding. However, the families of both the bride and groom opted to continue the festivities, replacing the bride with her sister. Surbhi’s body was kept in a separate room but was later cremated.

The bride-to-be appeared to have died of a cardiac arrest right in the middle of the wedding.

“It’s hard to believe a dead body was in the other room and a bride was being prepared in the next one. We didn’t know what to do in the situation. Both the families sat together, and someone suggested that my younger sister Nisha be married to the groom. The families discussed the matter, and both agreed,” Surbhi’s brother Saurabh told News Agency IANS while insisting it was a tough call for the family to carry on with the wedding.

Both families eventually agreed that Manjesh should marry Surbhi’s sister, Nisha (the circled).

The families, according to Saurabh, considered several factors, including the bride’s family likely expecting a dowry. In contrast, the groom’s family won’t be stigmatized for returning from a wedding without a bride. Surbhi’s mom, Guddi Devi, has given her consent for the wedding to go ahead even though she’s in a lot of pain losing her eldest daughter but is now being cared for by her son Gaurav.

The families considered several factors, including the groom’s family not being stigmatized for returning from a wedding without a bride.