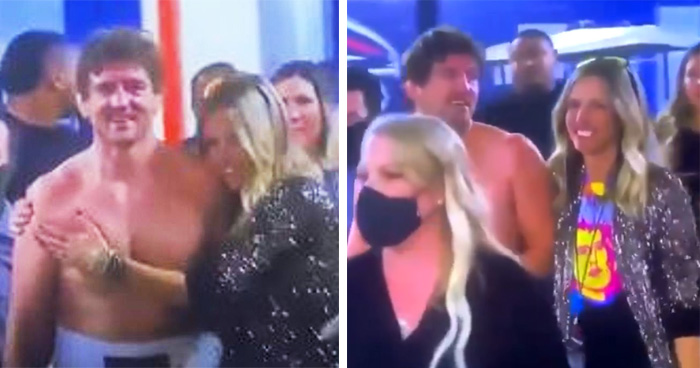 Just two days ago, Ben Askren lost his match to Jake Paul TKO. It was a rather short match with the UFC fighter knocked out right after he fell from a single blow that went in.

Congrats to Ben “the Askew” Askren for finessing that bag 💰💰💰

Prayers up to anyone who paid for that PPV 🙏🏻🙏🏻🙏🏻pic.twitter.com/xri1Kg2M0T

Philip DeFranco tweeted, “Congrats to Ben “the Askew” Askren for finessing that bag. Prayers up to anyone who paid for that PPV.”

The 36-year-old former UFC fighter took a direct jab in and brought home $500,000. Meanwhile, the Youtuber who jumped in elation in the ring made $690,000. Fans were, however, disappointed with how short the match was. Soon, rumors of the match being rigged emerged.

After losing the match, Ben sent a tweet to apologize to his fans.

A user tweeted, “Walked out with his family smiling lmao. He really secured a huge bag.”

Another angrily commented, “Any honest fighter should be mad that the ref called the fight because Ben “stumbled”. You didn’t win, it was rigged and the ref wanted his bet winnings.”

Ringside footage of the match showed Ben staggering forward; the ref called it.

In the interview after the fight, Paul gushed, “To think I’m here standing next to these legends, it’s unbelievable.”

“This is the craziest moment of my life. I told y’all I was going to do it in the first round, I told y’all I’m a real fighter. I don’t know how many times I’ve got to prove myself that this is for real.”

He continued, “This is for Shadow, my security guard who passed away 10 days ago. He told me I would knock him out in the first round, he said he had a vision in a dream. This has been the hardest 10 days of my life, I’ve had to hold it together to keep this fight going.”