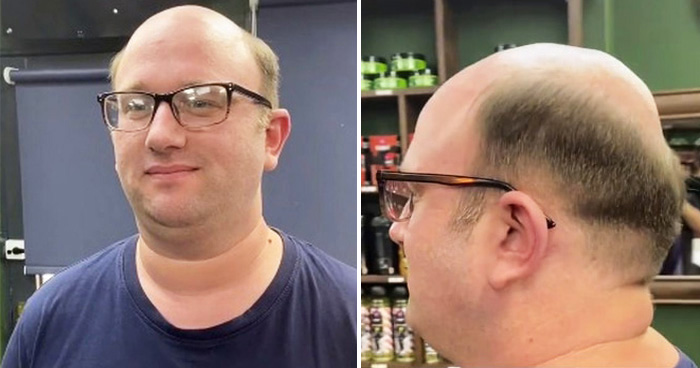 Mathew got frustrated with his friends and family telling him to go completely bald. And in response, the 32-Year-Old decided to visit the hair company Novo Cabelo. In a clip shared to TikTok @novocabelohair, Mathew did indeed undergo a transformation, which involved a hair system glued onto his head.

Mathew, 32, got sick of his friends and family commenting on his balding head.

So he decided to get a transplant from the popularly known hair company named Novo Cabelo.

His visit to the Ottoman Traditional Turkish Barber in Richmond, Yorkshire, was a success, especially as Mathew has been left looking ten years younger than his age. As seen, the stylist had first measured the spot on his head that would be covered by the new hair and drew directly onto the material.

His transformation started with the measure of spots on his head to be covered by the new hair system.

Then his scalp was protected with special treatment, and the glue was applied before the hair system was pressed down onto his scalp.

The scalp was then protected with special treatment, and the glue was applied before the hair system was pressed down onto Mathew’s scalp. Next, the hair was cut and styled, so it matched with his natural hair. The result was downright INCREDIBLE.

Next, the hair was cut and styled, so it matched with his natural hair.

Styling it all out!

The video has since garnered hundreds of likes, and in the comments, people showered praises. One user wrote: “Big difference he looked mid-forties in the original. That easily took 20 years off him.” Another revealed they would be well up to try the same, while a third stated: “You’re amazing.” Hair loss is a natural part of getting older, but most people find it deeply distressing.

The result was INCREDIBLE.

Mathew went from looking like he was in his late 40s to his early 20s.

In an interview with Daily Star, Rob of Novo Cabelo shared that his client Mathew is now more confident than before and loves having hair again. He attested that the reaction was so positive as people commented on how much younger Mathew looked. Rob claimed people reckoned he looked ten years younger, thanks to the new head of hair glued onto his scalp.