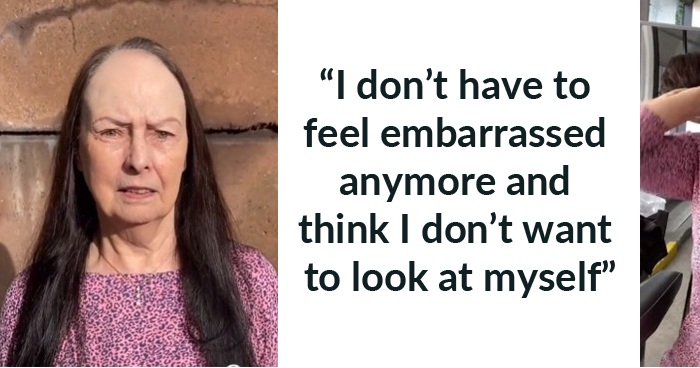 Woman Left In Tears After Getting A Surprising Hair Transplant

Brenda Vickers has had her confidence shattered due to an irreversible hair loss caused by celiac disease. Due to her bald head, she was embarrassed to look in the mirror or even pose in photos for twenty years. But thankfully, the 78-Year-Old has recently been given a new lease of life after receiving a hair transplant.

The pensioner spent years too embarrassed to look in the mirror or even pose in photos.

Brenda of Walkergate, Newcastle upon Tyne, was left in tears when shown her hair transplant. The hair replacement was from a Durham-based firm Novo Cabelo and her husband, whom she’s married to for about 56years, Brian, 81, loved the new look. This moment has since been shared on TikTok, garnering over half a million views.

A £350 human hairpiece was used for the astounding transformation.

Rob Wood of Novo Cabelo showed the moment Brenda teared up after seeing her new look (an attached £350 human hairpiece). “It feels good that I don’t have to be self-conscious when I go out. I don’t have to feel embarrassed anymore and think I don’t want to look at myself.” Brenda stated.

Rob Wood shared the moment Brenda teared up and appeared stunned at her new look on TikTok.

She claimed the transformation has boosted her confidence and added her head should be massive with all the compliments she’s been showered with. The pensioner continued: “It’s changed everything. I’ll go out more now because I can feel confident, and that’s an unbelievable feeling. Everybody who I’ve spoken to has been so complimentary and kind.”

It got pretty emotional, and indeed, her husband, Brian, 81, so much loved the new look.

“It’s changed everything. I’ll go out more now because I can feel confident.” Brenda, pictured with Brian, stated.

“People have been saying I look 20 years younger, but I’ve still got the brain of a 78-year-old. My body is old, but my hair is young. I’ve not seen myself look like this for so long.” As anyone would, Brenda had been anxious before the procedure but was left startled after seeing the outcome, which she dubbed astounding.

Initially, Brenda was anxious but was ‘stunned’ after seeing the results, which she dubbed ‘astounding.’

Brenda believes her hair loss is due to an immune system disorder, celiac, diagnosed in 2017.

Brian, Brenda’s husband, admitted it’s like being married to someone 20 years younger. He added the transformation was beautiful, so he’s very much pleased for her. “I got a shock when I first saw her. I found her very attractive. She’s not a bad looker, you know?” Brain, according to Daily Mail, said.

Brian, pictured with Brenda before her hair transplant, said his wife ‘is beautiful, so I’m so pleased for her.”

However, Brenda believes her hair loss is due to an immune system disorder, celiac, which she was diagnosed with in 2017 but stated she has been suffering for 20years. Notably, she had asked a family friend for anyone who could help and was referred to Rob, who then invited her for a consultation at his salon in Saehan, County Durham.

Brenda, pictured on her wedding day rocking a beehive hairstyle, had tonnes of dark hair in her younger years.