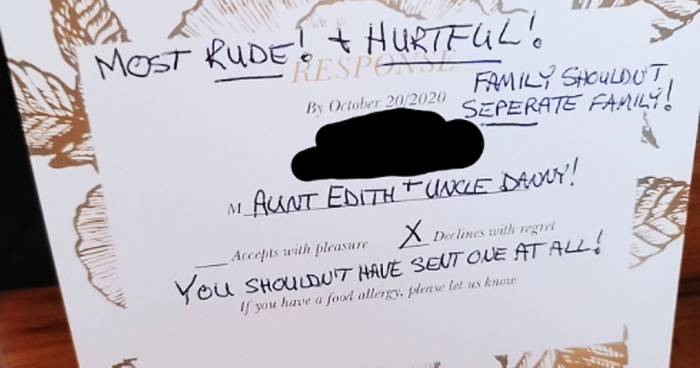 Wedding planning is demanding. With an endless list of things to do, from décor to dress and everything in between, the demand is undeniably at lightning-fast speeds. With that said, there’s, however, one part of a wedding plan that guests primarily pay attention to ‘The Invitation Card.’

An angered aunt turned down her niece’s wedding invitation as her partner of about two years wasn’t invited to the event. Aunt Edith claims it would’ve been best if the couple didn’t invite her at all if they wouldn’t include her BF. The niece has since received the invitation card back in the mail, and instead of marking if she could make it or not, the aunt left angry messages that have left the internet divided.

An angered aunt turned down niece’s wedding invitation as her partner of about two years was omitted. Instead of marking if she could make it or not, she left angry messages on it.

“Most rude and hurtful.” Aunty Edith wrote on the card. She included her partner’s name next to hers – a thing she claims the couple should’ve done. She added: “Family shouldn’t separate family. You shouldn’t have sent one at all.” The bride-to-be reacted, explaining that due to the pandemic restrictions, she couldn’t invite everyone, adding that she had nothing to do with her aunt’s BF, Uncle Danny and that he was barely tolerated within the family.

Most people backed the couple, claiming they should be permitted to give invitations to whoever they want to be part of their special day. Aunt Edith was dubbed an “overwrought drama queen,’ with one saying: “That’s a quick way to quiet being invited to family gatherings ever again. Yeesh, Aunt Edith. Another said: “Edith needs to harden up,” while a third declared: “The trash took itself out.” A few people reveal it didn’t matter if it was wrong not to include Uncle Danny as Aunt Edith reaction is quite extreme.

The aunt’s reaction left Reddit users divided, but most people backed the couple, claiming they should be permitted to give invitations to whoever they want to be part of their special day.

“It’s possible to think the couple was rude for not inviting guest’s long-term partner while also thinking the aunt’s reaction was over the top.” One woman wrote. Many people agreed that partners of more than a year should be included in wedding invite but then acknowledged that COVID-19 restrictions had changed everything. On the other hand, some people sympathized with the bride after going through the same scenario and ultimately cutting ties with their family. In your opinion, who is at fault?