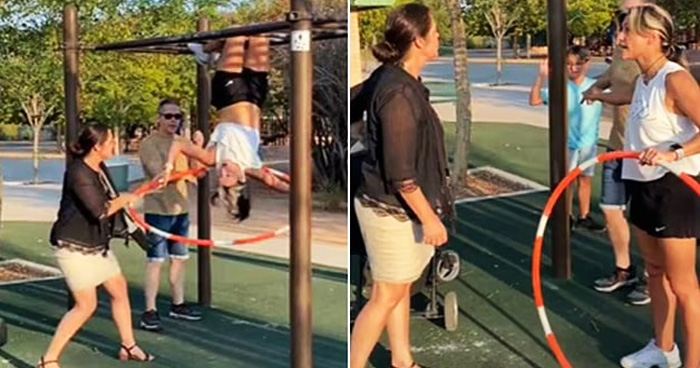 Getti Kehayova recently hanged out at the park in Las Vegas with her family, and while having a swell time, it eventually got disrupted. Hanging upside down from a set of monkey bars and hula hooping, Getti, who holds the Guinness World Records for the hula hoop spun, was criticized by an angered mom who claimed she was half-naked due to showing her sports bra and stomach.

Getti Kehayova (L) was left perplexed after an angry mom accused her of flashing her sports bra in a park.

A video appeared to show the stranger yelling loudly at Getti as she worked out.

The 43-Year-Old was practicing when the stranger came over and started yelling at her about her obscene outfit. While on the monkey bars, Getti’s shirt had slipped down, revealing the bottom of her white sports bra. The confrontation was captured on camera, and Getti has since uploaded it to TikTok, which has gone viral.

Getti was hanging upside down from a set of monkey bars amid practicing her skills.

The stranger claimed Getti’s outfit was obscene before yanking her hula hoop off her.

In the clip (made private), Getti can be seen wearing a white tank top and running shorts at the park, and the only reason her sports bra was showing while upside down was because of gravity. The mom (unidentified), who was pushing her child in a stroller, angrily pointed to Getti’s top that was sliding down while on the monkey bars.

The 43-year-old holds a Guinness World Record in hula-hooping. Watch one of her clips here:

“Everybody around here sees this! You’re half-naked right there. This is a place where kids play.”

“Everybody around here sees this! You’re half-naked right there. This is a place where kids play.” The woman screamed. In response, Getty urged the woman to stand back while she was hula hooping. She had said: “Watch yourself. I’m trying to film.” But the woman continued to rant, saying: “This is a place for family. You can’t be half-naked up there.” She turned to Getti’s husband, Michael, and said: “Are you okay with this?”

The situation got to the point where the stranger oddly yelled at the local man filming – telling him to mind his own business.

Getti tried to explain she was working out, but the woman asked why she was wearing ‘revealing clothing.’

As seen, Getti tried ignoring the woman, but just when the stranger caught her son filming her hula hooping, she gripped about everybody being on TikTok. She finally was able to grab Getti’s hula hoop and tossed it on the ground, forcing her to get off the monkey bars. The man filming tried to intervene, but the woman yelled at him, claiming it was none of his business.

The woman threw Getti’s hula hoop into a lamppost and said, “Let me show you what you can do for a TikTok.”

Getti admitted she’s shaken up by confrontation, and it’s unknown what triggered the stranger’s outburst.

In the end, Getti and her husband Michael gave up on quarreling with the woman and left the scene with their son. When she posted the video, Getti shared with her followers that the confrontation still shakes her. However, the video has been watched over 3million times and has equally garnered comments from people worldwide.

Getti insisted in the comments that the out-of-the-blue confrontation was ‘no joke.’