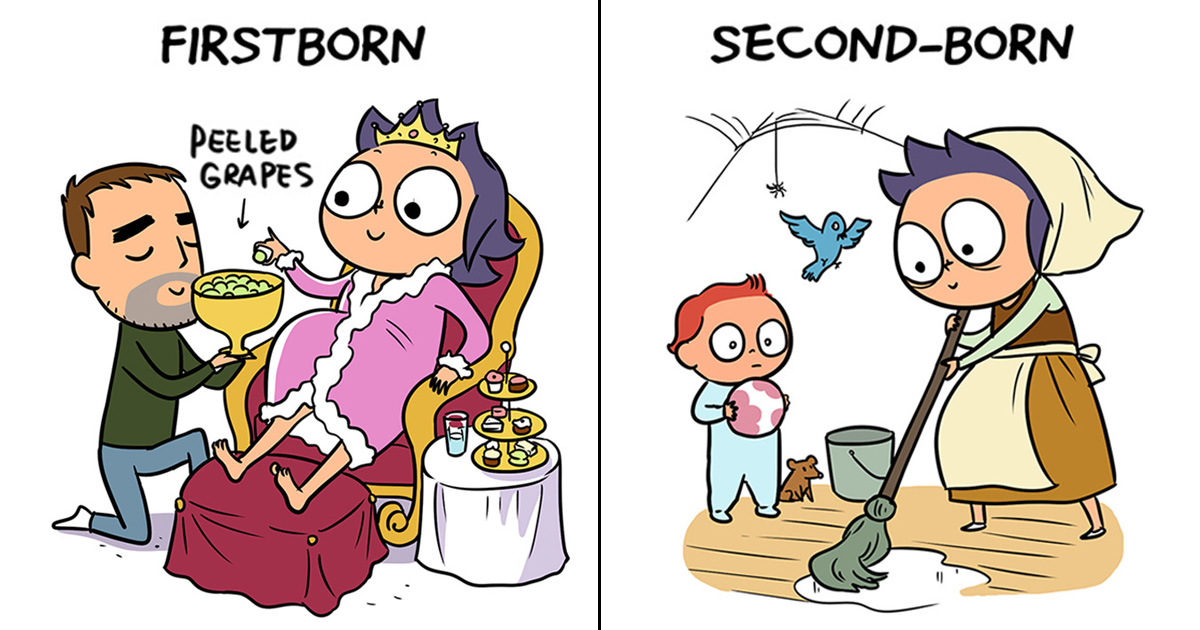 A Mom’s 16 Hilarious Comics That Really Nailed First-Born Vs. Second-Born

Anyone who has been a mother surely remembers how the responsibility of parenting can feel overwhelming. There are the first few months when you lose a lot of sleep and don’t understand the hormones fluctuating. In the next few years, you try to be a mother who is not overprotective and always there for your kid.

And then, there is your secondborn who seems to be enjoying the free-range parenting style because apparently, kids don’t die that easy. A few licks of the floor won’t give them diarrhea, and sweets won’t ruin their teeth.

When it comes to their diet…

Hey, I know someone who’s had instant food for most of their life and is still quite alive. Junk food once in a while isn’t bad.

Oh, seen that before.

Things seem a little less impressive on the second round, poor second-born child. But we still love them with our whole heart, and nothing in the world is big enough to be in our way to support them.

Weng Chen, who draws these honest motherhood comics with a secondborn child. She started ‘Messycow comics,’ based on her own life with her two daughters, Electra and Ali.

Our gastric acid’s function is to kill foreign objects and bacteria that may be harmful to our intestines. That said, don’t purposely ingest dangerous things to test it.

When was the last time you had time for yourself, mothers? Spare some hours to spoil yourself before you burnout from the parenting job!

Weng Chen is a Chinese who now resides in America. She had always loved the idea of making comics, inspired by one her mother made for her when she was a young toddler herself. While Messycow was more of an impulse, it is a very well-received series.

Some of us need to ask for the pictures to be printed out, and we want to choose the best one. It’s such a hassle to do… I have his picture on my phone anyway.

Some parents never really stopped taking pictures of their kids so much so their smartphone is just filled with it. Albeit tired, showing off how proud you are of your kids is not such a bad obsession!

Ah, yes. The hands-down. As a third child, this hits home, even when you’re the only girl after two brothers. You become a tomboyish girl, although your wardrobe doesn’t really have that many dresses, to begin with. Not that it’s bad, though – comfy, big shirts with loose pajama pants are the best combo ever.

You wanted the best for them.

Eventually, you realize that as long as these toys look fun and don’t pose any danger to the kids, they’ll love it. $100, $10, they don’t care.

As long as you follow the doctor’s guideline to consume essential vitamins before conceiving and during early pregnancy, yea. Just eat. As long as you have enough nutrition, cravings are perfectly normal. No alcohols, drugs and smoking, though.

This is tricky because some mothers don’t lactate enough. You breastfeed as long as you can; it’s very nutritious for the baby! But don’t worry, it’s not your fault if you are unable to breastfeed them. There are many baby formulas available out there.

Best time to learn everything.

Every kid is different, so you do you, moms! Just remember not to bury them under so many learning activities that stress them out, keep things fun!

Because a mother’s job can never be paused.

Just because you’re pregnant, you can’t let go of your job as a parent. Your husband still has to go to work, and you can’t imagine ever getting enough sleep within a few months when you’re due.

Getting the hang of it.

This is at least one good thing out of them all. You stop panicking over small issues.

She’ll lose them when the baby is born, don’t worry, guys. She will need all those energies for two kids anyway. Don’t worry, moms, getting a bit chubby after having kids is perfectly normal.