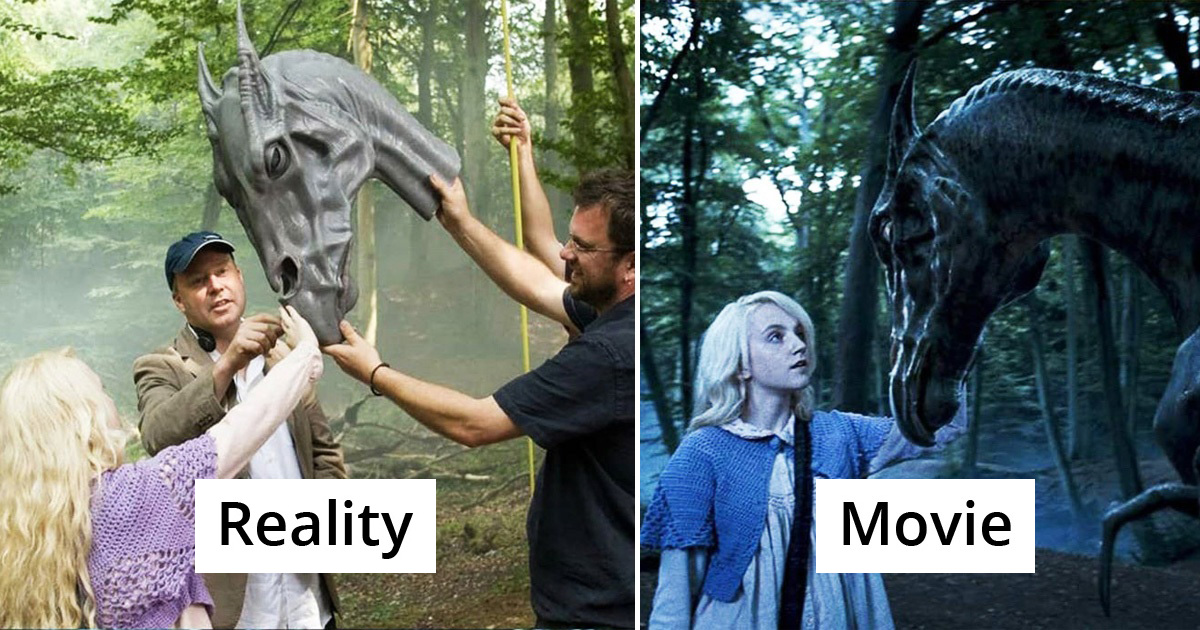 33 Famous Movie Scenes With And Without Special Effects

The movie industry has made great strides when it comes to special effects. Remember the old days when you could laugh at the amateur grade special effects of your favorite film?. Well, movie producers have upped their game and now you can watch a movie believing it’s all real – only to have your hopes dashed.

An Instagram account called movies. effects have dedicated their platform to showcase the power of CGI and how unbelievably these effects can transform a whole film.

Boasting of over 398k followers this account finds unique never-seen-before movie scenes before spoiling your fantasy and showing what happens behind the scenes right before they are turned into those magical shots you so nostalgic about.

We have samples some of their photos however, beware some of these shots might even change your whole perspective of the movie industry.

Harry Potter And The Order Of The Phoenix

Guardians Of The Galaxy (2014), tells the story of a group of intergalactic superheroes and their thrilling adventures in the cosmos. The rather unusual vigilante crew made of. The dynamic duo A raccoon, together with a talking tree, save the Galaxy on multiples times with the help of other superheroes in the franchise.

Watching this movie reminds us that CGI is just as important as cameras during movie production.
The big, muscular guy Drax, in the picture above, is eye-catching for more reasons than the size of his biceps.

Atomic Blonde (2017), is an American spy thriller film with a story that takes place in Berlin. The makers of this film used CGI while trying to recreate entire areas of Berlin. Traveling to Berlin and getting some aerial shots were not that easy, and in some cases, not legally allowed.

The creators explain their decision logically: “Even if they were allowed to fly around in the skies over Berlin, it would have been 2017 Berlin of course so, we built the entire district from scratch.”

Harry Potter and the Half-blood Prince (2009)

This is one film that definitely put CGI to good use because if not for the visual effects’ wizards, the magic of the silver screen wouldn’t exist. Yet, on the other hand, a wooden magic stick is cheaper than a team of experts with all the necessary equipment.

That being said, Harry Potter films cost from $100 to $250 million each. The lucrative film industry had paved way for more revolutionary effects, that have ushered in a new generation of CGI standards in the industry

When the movie was first released back in 2006, everyone agreed that Davy Jones with his scary Octopus head was one hell of a villain. Back in 2006, the world saw.

Considering the fact that the movie was made more than 10 years ago, it’s fair to conclude that the current standards in the CGI industry have certainly taken a leap forward. However, programmers did a splendid job creating such a ghastly ghastly-looking character and the technology must have been revolutionary at the time.

This film is about a monkey and human warlords locked in conflict over Earth’s precious resources. The movie producers brought in the big wheels at CGI to help create the animal-based cast which was extremely appreciated by P.E.T.A.

In its official statement, it expressed its support by saying that the movie “proves that computer-generated imagery, or CGI, has no limits, offering powerful anti-captivity, pro-animal rights messages along the way.

Alice in Wonderland (2010) is a computer-generated film. Directed by Tim Burton, famous for dark, eccentric horror and fantasy films. the movie portrays the bizarre and fantastical world of Wonderland in a believable way and has a green screen as a finish.

Ironically, the movie’s main criticism was its heavy use of computer-generated images

The night might be dark and full of terrors, but the budget for Game Of Thrones easily stands out as one of the most expensive TV series ever made. The budget for a single episode, at least in season six, was estimated to be around $10 million. So, if you’ve got 10 episodes per season and you do the math.
Watching the movie, it’s easy to notice why the series cost a fortune to produce. The cast, the locations, the costumes, and… A stress ball that becomes the most badass fiery dragon on the silver screen.

The iconic boy of the jungles, Mowgli, was reborn in 2016 through the film “The Jungle Book” The film offered a new and more realistic way of seeing Baloo, Bagheera, Kaa and other characters in the beloved story.

CGI played a huge role in bringing the jungle to our screens and let everyone encounter these jungle dwellers at a closer distance. The director Jon Favreau even received an award from P.E.T.A. for finding an innovative way to prevent exploiting and harming any animals for the production of the film.

Back in 1999, when “The Matrix” made its debut, the film was the epitome of science fiction perfection. The world applauded it as a CGI revolution. The fights, the stopped bullets, the clones, the massiveness of the artificiality that looked so real was overwhelming.

The movies’ gross cost was etimated to range between $60 to $150 million and even though some of the effects might look a bit outdated no one can deny their revolutionary status.

There’s no doubt Deadpool 2 (2018) is a pretty badass movie. The movie budget was estimated at a higher figure but 48 hours until the producers were given green light, the budget was cut down to $58 million.

Despite the budget cuts, the film was still a success raking in $786,717,745 worldwide in ticket sales. Obviously, thanks to CGI.

Thanks to CGI programmers, Voldemort wouldn’t have had his iconic nose-less look. This detail, although minor was essential in turning Voldemort into one of the most recognizable villains ever.

One could argue that the use of a professional makeup artist could do the job and therefore CGI animators were unwarranted. Yes, but that would take too much time, therefore the final image of Voldemort was the result of combined efforts of makeup and CGI artists.

Pirates of the Carribean: Dead Men tell no Takes (2017)

Pirates Of Caribbean: On Stranger Tides, the fourth movie of the saga, was the most expensive movie ever. The cost of creating it reached $379 million, easily crowning it with this achievement. The accumulated budget included hiring CGI programmers to create entire oceans, islands, continents, ships, and undead armies. However, we can comfortably say the end justified the means

Davy Jones and his crew from Pirates Of Caribbean: Dead Man’s Chest (2006), receives attention more than once in a list, dedicated to CGI masterpieces. The flawless character will go down in CGI history books and it’s easy to see why.

The Beauty And The Beast (2017) is another masterpiece in the CGI world. The Beast, of course, is the work of beauty if we talk of creations. Yet not many know that o. The Beast was originally planned to be brought to life with just the use of prosthetic make-up. Eventually, CGI took over.

Upon its cinematic release, fans were sure that this movie was a game-changer in the CGI world. And yes, it held up to its expectations. Many scenes were unusual and multi-layered, which itself raised the bar even higher for upcoming CGI-based movies.

Back in 2012, when The Avengers made its a cinematic debut, there was no doubt about the powerful CGI presence. Since then, Avengers franchise movies have either topped the box office list as either the most expensive movies or one of the highest-grossing movies ever, or both.

Fantastic Beasts and Where to Find them (2016)

Written by the legendary J.K. Rowling, the Fantastic Beasts and Where to Find Them is a tale of the adventures of one writer in New York’s secret community of witches and wizards.

Released in September 2016, the movie tried to portray New York City in the roaring 1920s and they did a good job, of course, backed up by a whole lot of CGI. the background buildings, and even their doors – most of them weren’t real.
Generally, the movie did pretty well and while the budget for it was roughly $200 million, it grossed $814 million in return.

Jurassic Park, made it’s cinema debut back in 1993. Hailed as a cinema classic, the film did so well it scooped 3 Oscars and set a whole new standard for dinosaur movies.

Interestingly enough, despite the dinosaurs being the biggest selling point of the movie, “Jurassic Park” features only 15 minutes of actual footage with the creatures.

Back then,in the 90s, CGI was still largely uncharted waters in the movie industry and Hollywood was reluctant to invest high-tech special effects due to it being too expensive. However, the tides changed and it seems as if it really paid out as the film eventually became the 31st highest-grossing movie in the history of American cinema.

While the iconic Deadpool costume is actually a real, physical costume other characters in the superhero franchise are not completely real requiring some CGI technology in creating scenes.

Thanks to CGI magic, we have been granted the gift of witnessing something thrilling and way more out of this world, at the comfort of our seats.

Avengers: Infinity War (2018) is often praised as the epitome of CGI perfection. Used creatively and originally, One only can imagine what will follow in the future.

AVATAR producer james Cameron waited 10 years until the CGI got advanced enough to make his grandiose vision of AVATAR (2009) possible and affordable to make.

The actor behind Iron Man, Robert Downey Jr. Would only wear the helmet, sleeves, and chest of the costume over a motion capture suit. No need for the whole thing, there’s CGI for that.

Spoils the fun ain’t it.

Shot on one of the beautiful islands of New Zealand with a gross budget of $273 million, to cover additional visual effects and extended film’s running time.

Interestingly, it took eighteen months for the filmmakers to craft the CGI version of the Empire State Building, while the real thing was built in fourteen months.

During the production of Terminator Genisys, Arnold Schwarzenegger worked for hand in hand with CGI programmers in order to recreate his current and younger CGI body models for the movie scenes.

Who would have thought that the Incredible Hulk is actually… A weirdly shaped, deformed green man. To keep pace with the constantly evolving, Incredible Hulk, the technology to generate the always-angry superhero is evolving just as much.