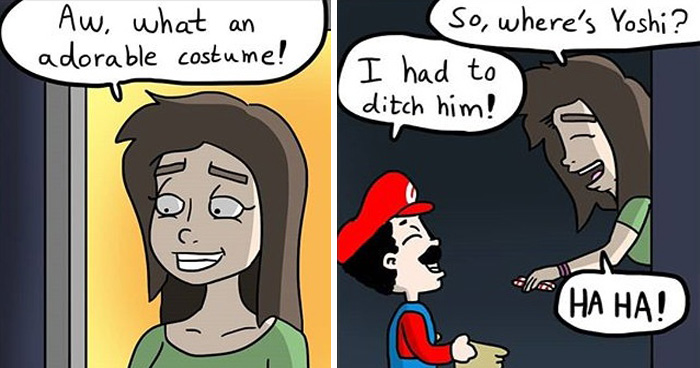 We love some funny comics with original jokes that really make our sides hurt. Among so many artists who create such witty comics, Kasper is one of the most original out there. He is the author of the ‘It’s The Tie’ comic series and often takes popular and trending topics and personal experience as part of his comic.

He currently has 58.2k followers on Instagram, but his posts often get more hits than his followers! Aside from Instagram, he also posts his comics on his website. He also reveals his plans for making a Patreon account.

Enjoy it while it lasts.

Kasper has always loved comics and dreamt of making some himself. He is Dutch and is very inspired by Belgian comics such as Garfield and Beetle Bailey. These are the reasons why he often makes a 4-panel comic and long-winded short stores.

At the mental hospital…

The truth behind advertisements.

His comics get so popular because they often talk about subjects that people are very familiar with. Such as this one that takes a deeper, closer look into an ad for a product that kills only 99% germs. What happens with the other 1%?

Need something from the trunk.

Not so identical twins.

The stories are also often unpredictable. Kasper loves to imagine what if their characters had acted way outside what normal people would. Like how this bully might be a bully, but one that carefully evaluates everyone’s performance in the school’s ‘food chain.’

The pen is mightier than the sword.

I hate my life.

Some comics really teach a lot. For example, the reincarnation one talks about appreciating life. The pirate who confidently thinks he can navigate without a guide really got lost for good. And the parent who always wanted a perfect son instead of loving them as who they are.

Humor has also changed so much these days. As of recent years, more people are bringing up awareness not to joke about things that may be hurtful to people. Racists, sexists, and crude jokes on the LGBTQ+ community are now unwelcome.

Give me my money back.

How he got a raise.

A man with a clear goal.

That one lame kid.

Did you have a good laugh? Or maybe at least a big exhale through your nose before you leave this page? Well, that’s what Kasper wishes his readers for, and we, too, hope you have a good day ahead!