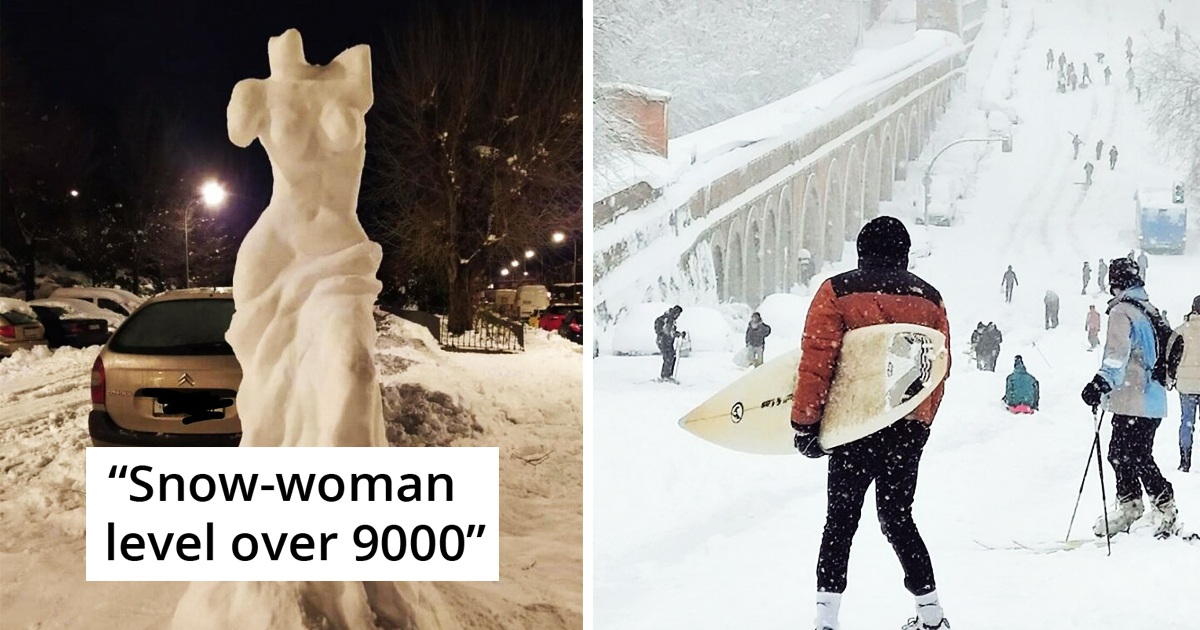 30 Unusual Pics Of Spain Experiencing Their Biggest Snowfall In Decades

Some people have spent almost their whole life living in Spain without ever seeing the ground covered in thick snow. At most, they’ll only see heavy rainfall and experience colder weather at night. But for the first time in more than 50 years, the interior minister Fernando Grande-Marlaska dubbed the Filomena storm as ‘the most intense.’

This storm is heavy enough to cause the airport in Madrid, the heaviest hit, to close down temporarily. Railroads and trains are stopped, with two have been found frozen to death.

The people of Spain are reveling in an unusual phenomenon. For the first time for many people, they can do a snowball fight just outside their home on Madrid’s quiet streets. Fun fact: Filomena means ‘friend, lover, a friend of strength’ in its original Greek language.

A once in a lifetime view on Spain.

“The Aftermath: Largest Snowfall in the Past 50 Years in Madrid, Spain – 406 roads cut.”

“Cows making their way through the very deep snow cover on the slopes of Montes de León in northwestern Spain.”

“Big snowfall these days in Madrid. Naoki went out exploring the backyard. He’s a real Viking!”

“Local artist from my neighborhood!”

“Storm Filomena caused traffic chaos ALL OVER the country, and covered Madrid with the thickest snow cover.”

“It has snowing like crazy in Spain and then there’s this guy.”

“My father’s car is down there. Many trees have fallen after biggest snowfall in the last century in downtown Madrid (Spain).”

“Madrid has seen its heaviest snowfall since 1971.”

“Madrid, Spain hit by the heaviest snowfall in 50 years!”

“Man skiing in Madrid during rare snowfall in Spain.”

“Heaviest snowfall in Madrid, Spain in over 50 years!”

“Making the best out of it.”

A gorgeous field of white.

“Snow fight in Madrid, covered in snow for the first time in 61 years.”

The people don’t look like they were ready for the extreme weather.

“A winter Snowfall in Madrid.”

Snowfall covering everything in sight in Madrid.

“The city is paralyzed, and skis have been the main ‘means of transport’ in Madrid since yesterday.”

You’d be stupid to not try making big snowball in this season!