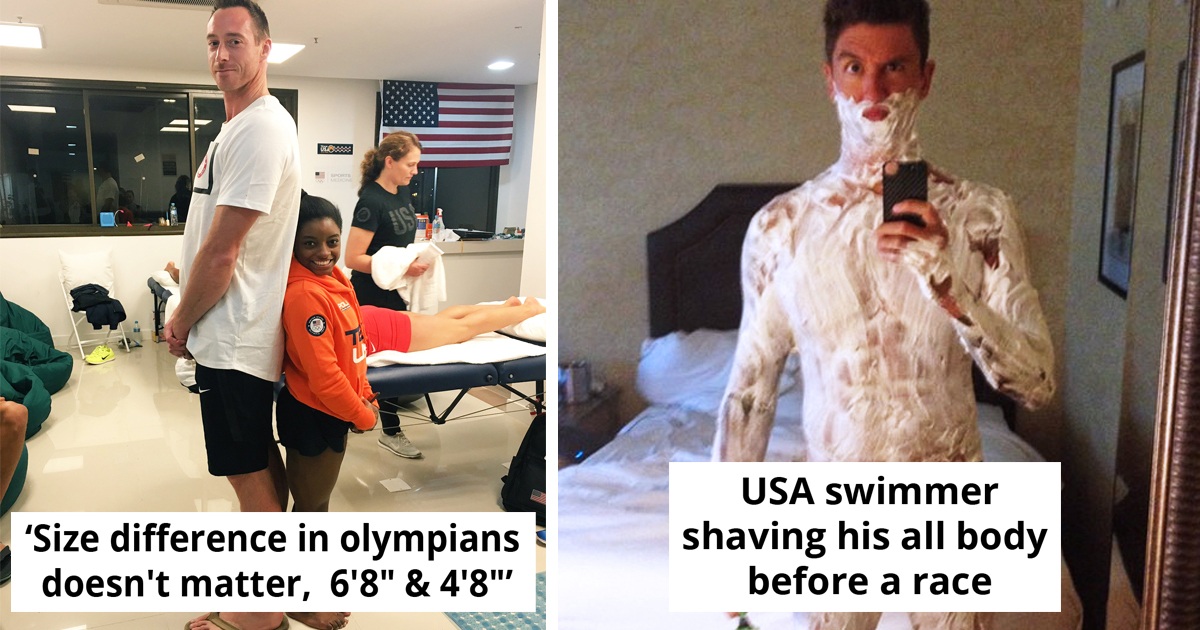 The body and life of athletes are different from other people, but also similar to people who dedicate their life to something. Their passion translates into the muscles, and scars they gain throughout the years they practiced. They teach people just how far they can push the limits far beyond what they thought was normal.

The gymnasts, despite their short stature, flaunt their elasticity. The basketball players tower over other athletes, practically only stand side-by-side with volleyball players. The cyclists push their leg muscles to the point one might be frightened from the sight.

Hands of an Olympic rower.

“Leg muscles of the first perfect 10 in Olympic history, at age 14. Nadia Comaneci.”

“An X-ray of a gymnast performing an exercise.”

“View from the top of the Olympic ski jump in Sochi, Russia”

“It’s only about not f**king it up now.” – Former Olympics cyclist Janez Brajkovic after a race.

“Simone Biles throwing out the first pitch for the Houston Astro’s.”

“On the eve of US Nationals!”

Simone Biles next to Shaq.

The huge hands of fencer Miles Chamley-Watson next to Pele.

The hands of Weightlifter Hidilyn Diaz became the first Olympic gold medallist for the Philippines.

“My first major sports injury happened at the 2010 U.S. Short Track Speed Skating Olympic Trials. It was the competition I had to do well at in order to secure a spot on my first Olympic team. The fall happened in one of the last races of the competition, the 500 meters, known for absolute top speed.

“I fell in the corner and put the front six inches of my blade straight into my quad. I bounced off the pads with the blade still in my leg, looked down, and had to pull it out myself because of the awkward position that I was in. I completely severed the VMO “teardrop muscle” and luckily barely missed the femoral artery which might’ve been the end.

It was one of the most difficult things I’ve ever gone through, especially because in the moments after, I started realizing that I might not be able to achieve the goal I set out for in the first place. If not for the people around me including my family, friends, and medical staff, I wouldn’t have been able to get back on my feet, especially in time to go to the Olympics and win two medals.”

Simon Biles next to David Lee, US Volleyball player.

“My name is Cody Miller. I am not a typical Olympic swimmer. I’m 5’11 and only weigh 170lbs. More often than not, I’m the smallest person in the pool.”

“I was born with a condition: Pectus Excavatum [Which I know… Sounds like a Harry Potter spell] My deformity began appearing around age 10. My condition puts stress on my respiratory system. Tests have shown that my sunken sternum and odd placement of other bones have caused a reduced lung capacity… To what extent is unknown. Doctors have said my maximum breathing capacity is likely reduced by 12-20%.

Also… I’m diagnosed as asthmatic… Which I learned, from studies run on me in college, has nothing to do with my pectus condition. I live with difficult circumstances as a swimmer. Despite my disadvantages, I’ve dedicated my life to swimming… And I’ve never given up.

Like a lot of you, I have struggled with body image problems throughout my life. I struggled with my appearance from a young age. I was a kid who was afraid to take off his shirt in gym class… people thought I was weird. At swim meets, I walked around the pool deck awkwardly while people stared and pointed at me. I was weird and abnormal…

However, I’ve realized this: No one is 100% satisfied with the way they look. Everyone has something about themselves they dislike. And that’s OK! Professional athletes, models… everyone has their own insecurities! I’ve embraced the fact that I have a giant hole in my chest! It’s OK!”

“A Dutch cyclist takes an alternative line in the Velodrome.”

“It’s all about the Olympics.”

“Dead last of her heat in 800 meters, but yet we are all proud of you: Sarah Attar, first Saudi woman to compete in Athletics at the Olympics.”

Hungarian weightlifter Janos Baranyai ripped his ligaments and muscle after pushing through 148 kgs/326.3 pounds at the Beijing 2008 Olympic Games.