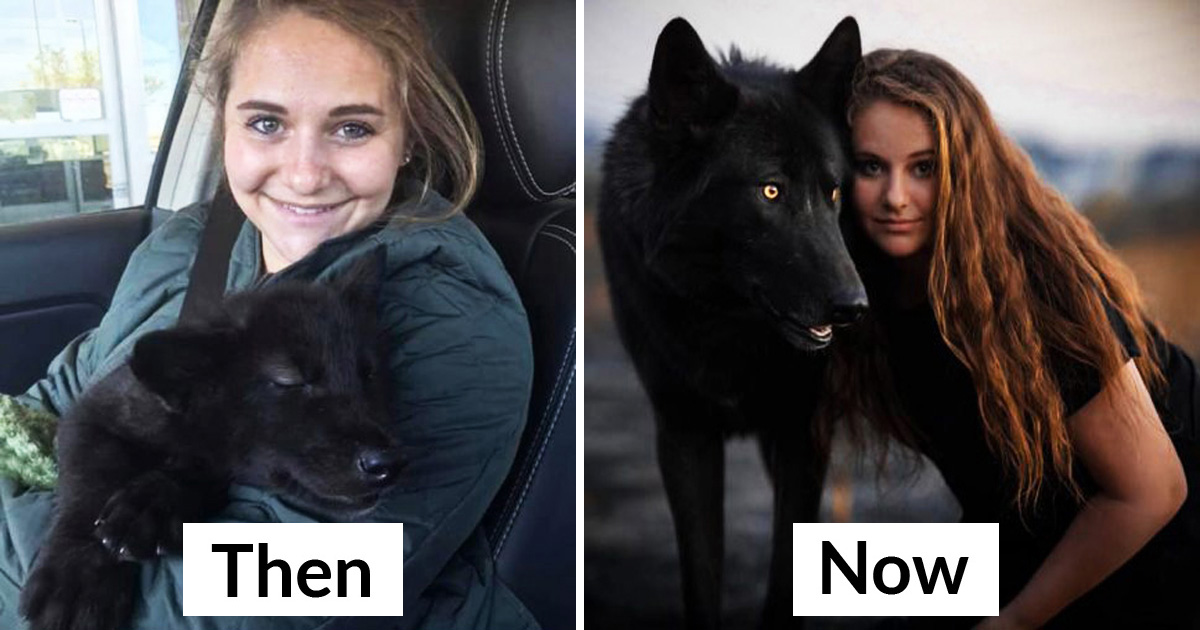 20 People Share Their Pets’ ‘Then And Now’ Pics, And It’s Adorable

You have heard of this slogan often by fostering a cute cat, Instagram accounts you follow. However, there are still many out there who prefer to find breeders because of preferences. It is not legal and wrong to buy an animal of your liking… but millions are euthanized at the shelter because they’re overcrowding the facility.

Not all of these animals had the worst treatment in their life. But some didn’t have to go through so much pain, and trauma had love been shown to them since the beginning. Cats or dogs, white or calico, old or newborn… all of them deserve a chance for love.

“Faelen the day I brought him home at 5 weeks versus now at 1.5 years.”

“London was intentionally paralyzed by her abuser.”

“She was to be a bait dog in a fight ring. Fortunately, she was rescued before ever making it into the ring. Due to her paralysis, the vet recommended euthanasia. A friend of mine, and employee of the shelter, saw London wag her tail and knew that she’d be able to walk again. My husband and I heard London’s story and knew we had to have her. We worked extensively with a specialist in Nashville, and, after several months of physical and hydrotherapy, London healed to 90%! She has also had 1 surgery.”

“Lazarus passed away last Nov. He will always be one of my greatest loves. He was found in a barn with 30 pounds of matted hair on his body. He lived quite the best few years after that.”

Dogfighting is an illegal activity that has become the cause of thousands of dogs’ suffering across the states. ASPCA reports that they have been involved in over 200 cases of dogfighting across 24 states with more than 5000 victims since 8 years ago. The brutality continues with human’s ignorance as ASPCA reports out of those who witnessed dogfighting, ’25 percent did nothing at all.’

“He literally couldn’t walk to the end of our driveway, or poop without pooping on himself.”

“We adopted him in May of 2019 from the county shelter. He was an owner surrender, because his person passed away and the family didn’t want him. His name was Coors. 9 years old, 40+ lbs, pure corgi. He had skin infections in his rolls, and was on Apoquel.”

“Now, hes down to around 25lbs. He loves to run and play! We switched him to a prescription diet, and he only needs cytopoint seasonally. He recently started having seizures, but after a full neurological workup, it turns out to be idiopathic epilepsy (best case scenario in an 11 year old dog who just started randomly seizing.) He’s spoiled like crazy, and is such a great dog!”

“My bf said to just go for it. I did. One of the best decisions ever.”

“This is Boris. I met him at PetSmart when they were hosting a no kill shelter. They told me he had recently been rescued by a volunteer and was heartworm positive. He was in a kennel completely ignoring me. I wasn’t sure if he would like me since he kept eyeing some kids running around. It’s been 5 years and I just wish I would have found him sooner. He’s my heart.”

“Harley Quinn had a glow up.”

“We assumed he would be untouchable and never warm up to people again.”

“Casper was dumped by his previous owner when he hit the difficult teenage phase, and ran loose as a stray for almost 6 months before we were called to come trap and rescue him. We assumed he would be untouchable and never warm up to people again, so he was going to go to a sanctuary, but I spent day after day sitting with him reading, talking to him, bringing him treats, and we ended up bonding intensely.”

“His trust in me to keep him safe has allowed me to slowly reintroduce him to being a pet and community member, and now, a little over a year and a half later, he is a sweet, cuddly, social boy who loves to shop, hike, camp, go on road trips, and hang out with me and my other dogs.”

“One day later, I was rushing her to the veterinary ER. I handed this sick little girl over to the vet tech, thinking I’d never see her again.”

“Last year, we started fostering healthy little puppies. We were between fosters when we were asked to take in a puppy with severe mange just for a few days. Arya was hospitalized for five days. In that time, my husband and I became emotionally invested in her and asked to keep fostering her through her recovery. When we picked her up from the ER, I expected a sick puppy, but they handed me this wriggly, happy girl. The picture on the right was just five weeks later. She was with us for four months in total, and now she has a wonderful forever family who sends us tons of updates.”

“The shelter didn’t care, they didn’t even assign him a cute name, just a number.”

“Everyone in rescue will tell you it’s hard. Not enough money, fosters or time to save them all, but every once in a while a picture hits your inbox that gut punches you and all your well made plans go out the window. That was the case of Thor. I cried when I saw his picture. He’d given up. He wasn’t given the 3 day stray hold, pull him today or he dies in the morning. So I moved a couple of mountains and that’s exactly what we did.”

“He came to me 30lbs underweight, open sores everywhere, heartworm positive, and a mouth full of rotten teeth. I didn’t care. I was on a mission to make his senior years the best he ever had. And that’s exactly what happened. He lived another two years a smiling happy boy, and in the end, I was with him to say goodbye. My soft spot for seniors holds a promise that they never cross that bridge alone. I miss my old man. He was a very good boy.”

The ‘blood fight’ is a crime that is lucrative for many. “Major dogfight raids have resulted in seizures of more than $500,000, and it is not unusual for $20,000 – $30,000 to change hands in a single fight,” reported ASPCA. The violence continues if a dog loses – the owner loses money and the dog is treated very brutally for failing.

“And at the end of a long day at work he puts a smile right on my face.”

“Meet Merle on his very first day with us (5 months old) sad, nervous and extremely timid. Fast forward to one year old, living his best life. This guy right here is the derpiest, spunkiest and most loving pup! His kisses and cuddles in the morning start my days off perfectly. Every time. This guy stole my heart so hard! Our labby Vega taught Merle how to be a dog and I wouldn’t want it any other way.”

“Handsome Harry! Hit by a car in the middle of the night, found by some nice people that took him to a shelter and then pulled by a rescue.”

“He was bought from a breeder and then surrendered by his family.”

“Saw him at a mobile adoption and my heart melted. When they packed him up to take him back to the shelter, I heard him crying and howling as they drove away. They said he was “too pushy, leans on you and plays rough!” Sounded like a Rottie to me! They also wanted him to be a “show dog”, but he developed Vitiligo and started losing the pigment on his face. 2 1/2 years later he is the best boy ever!”

“Left for dead in a drainage ditch he was picked up by the emergency SPCA ambulance.”

“He required lots of stitches to patch him up. When I adopted him and took him home, he smelled like sewage and I couldn’t bathe him for more than a week because of all of his stitches. Every day I picked a new spot and tried to clean his fur with baby wipes and brush him ever so gently. He craved human kindness and touch. And he learned to trust his fur siblings. He’s such a happy boy now!”

The most common breed that is used for the pit is the American Pit Bull Terrier. However, all around the world there are many other popular breeds such as Fila Brasileiro, Dogo Argentino, the Tosa Inu and the Presa Canario. These dogs are conditioned to be aggressive and even have ‘bait’ dogs to train them easier. Drugs are also often used.

“We believe he is an Aussie Shepherd mix. He was Black and Tan when we got him and about three years ago got his first tiny white spot. He changed pretty quickly from there but now seems to be done. He’s seen the vet and specialists who all agree it’s not vitiligo and he has no issues or medical concerns. He’s just a unique soul with a great personality and very handsome look.”

“She had never seen the ocean.”

“Last Monday I found out Juice had bone cancer. We live in Colorado… so I packed up the car and drove to CA. She’s 17. She is having THE BEST time you guys.”

If it is such a brutal, outlawed, and cruel crime, why aren’t more cases coming to light? ASPCA continues to explain that it ‘requires many of the same skills and resources as a major undercover narcotics investigation’ to get in-depth into a dogfighting ring. But resources are limited, including having to care for the seized dog during the case.