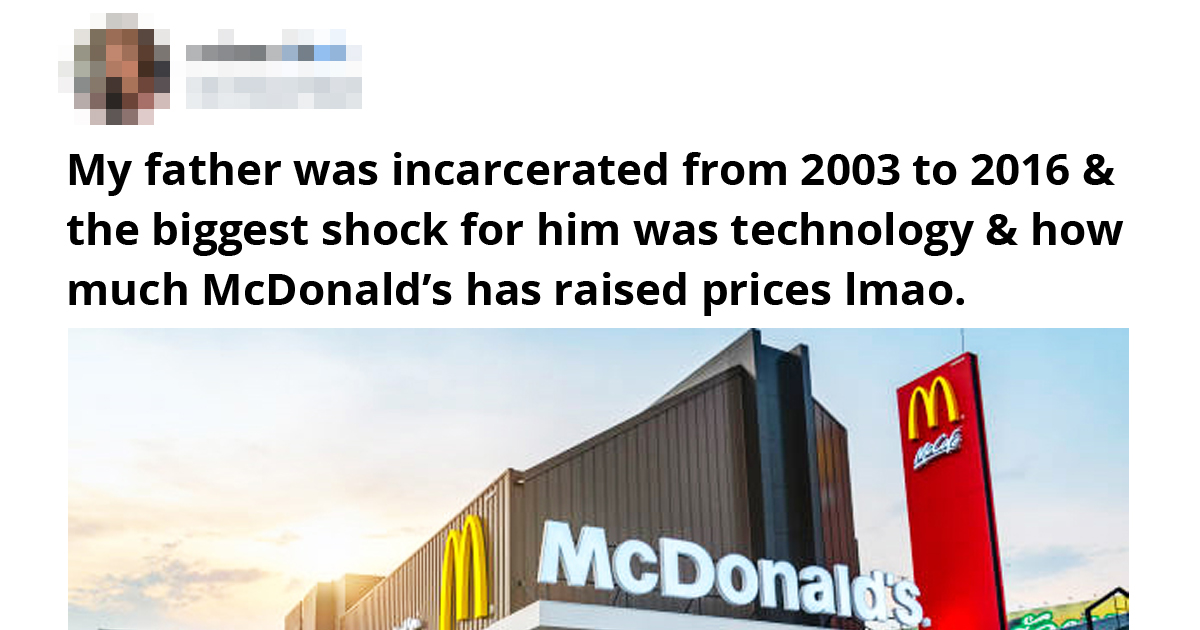 What is life like for people who just got out of prison? Because they are isolated from the outside world, these people tend to lose touch with time. In an age of globalization where things change so fast, people like them often find it hard to catch up to time, finding the outside world so bizarre and new.

4G and 5G technology, Netflix, Spotify, and even KFC menus – these former inmates each have their own memorable events that made that “Ah, I’m really free now” feeling sink in. Whether that’s feeling overwhelmed by the lotion choices at the supermarket or getting used to filling in online forms through a smartphone.

“I know a guy who did 2-3 years I think and I worked construction with him. He simply said, “The fact that I’m here with you but I can physically walk over there to that field 500 meters away without anybody or any walls stopping me.” – Reddit

“My father was a counselor in state prison for 12+ years. He told me the inmates would often talk about wanting to feel their bodies submerged in water. Taking a bath, swim, etc. There are only showers so that feeling up being weightless, floating, submerged was something these men would fantasize about.” – PigLatin99

“When I got to ride in a car again, it felt like we were going about warp 15. I think we’re only moving about 45 miles an hour. It tickled my dinky like a rollercoaster for about ten seconds. Also, at the grocery store it was really hard seeing people willfully buying cans of tuna. But I think the hardest thing for me was to quit crushing up spicy cheetos and putting them in all my food.” – mykilososa

“When I got locked up I left a lot of friends and family behind and did 3 years on my own, no visitors, no calls, no mail. When I got out it was a trip to get on Facebook and Instagram and see how everyone I was ever close to had moved on with their lives, having kids, getting married, getting fat, losing weight, starting and quitting jobs, falling out with each other, some even passing away. People think about a prisoner doing time but don’t understand that the time does them. You are frozen in it. While you’re stuck in a constant loop of the same day every day, the rest of the world moves on without you. When you get home, you feel left behind. It’s an anxious panic to catch up after that.” – SonicTheEdgelord

“I have done 5+ years in prison, I was mostly amazed by smart TVs, with Netflix and browsers directly in the TV. And the 4G internet speeds blew my mind as well.” – Lucyintehsky

“My father was incarcerated from 2003 to 2016 & the biggest shock for him was technology & how much McDonald’s has raised prices lmao.” – SmallPotatoes929

“One of the hardest things for me once I got out was making choices. Let me explain; in prison, you might have two choices for shampoo if you’re lucky. The first time I went shopping for hygiene essentials was at Target. I remember being so overwhelmed by the amount of choices for shampoo and having no idea which one to get. I stood in that aisle and cried for a few minutes before I just left without getting anything.” – Rapunzel6506

“Just got out. Weirdest thing was seeing all these damn scooters laying everywhere.” – vexterion1

“I went in around the first iPhone. Came out around 2014 and what disturbed me the most wasn’t so much smartphones but how everyone everywhere had one in their hand staring at it. It felt very ‘Black Mirror’/’Twilight Zone’-ish.” – DRACOSAPIEN

“A homie of mine found the freedom really obscure. He was so used to the guards telling him what to do that he got accustomed to it. He was really anxious because he had no sense of direction. On a lighter note, he was amazed by Snapchat filters. He kept on posting on his Snapchat story all selfie videos with filters.” – RedditR_Us

“I did 4 years. The day I got out my uncle took me to Walmart to get everything I needed. I went off by myself to get the things on my list. First I went to the lotion aisle. I was looking at all the lotion & became so overwhelmed by all the choices, dry skin, healing, scented, etc. In there I had no choices & was given what I needed. Having all these options overwhelmed me. I gave my list to my uncle to get it for me. It was really hard to go out in public for a while.” – Luna_Sea_

“I did 6 years. My biggest shock was finding out you can’t do much of anything without a smartphone. Companies don’t even do paper applications anymore.” – 4dollarz

“Spent 6 years behind bars. When I got out the biggest shock was the beautiful sites and colors. I forgot how gorgeous nature was, it put the thought into my mind that I never want to go back, because there is no beauty in prison, the beauty is on the outside. I’m glad I’m out now, and every day still take in the amazing outside world for what it is.” – MrDev16

“I have two family members who did a very decent amount of time… and of all the things that could’ve blown their mind, Spotify was the biggest. Even the obscure house artists they were buddies with back in ’89 were on there. Not having to burn any CDs or buy records. They still can’t get over it.” – malemartian

“My brother served a little over 3 years but the morning we picked him up we stopped by a grocery store to let him grab some snacks. He’s walking back to the car with this stunned look on his face and finally as he gets to us he goes, “I felt like I was on an acid trip I haven’t seen that many colors in so long, I need to sit down.” – zoinkzies

“Cousin did 5 for meth and robbery, when she came out she started crying when she saw my youngest sister was almost an adult.” – poisonpurple

“My brother just recently got out after 4 years! The first thing he did was take a shower then run his feet along the carpet in the house, he said he “just had to.” He wanted “KFC has those chicken and doughnuts! Those look f**king good.”

Those aren’t a thing anymore.” – dessertneutral

“Just money in general… You have no idea how to handle money, that takes a little time to get used to.” – tinkinoutsidedabox