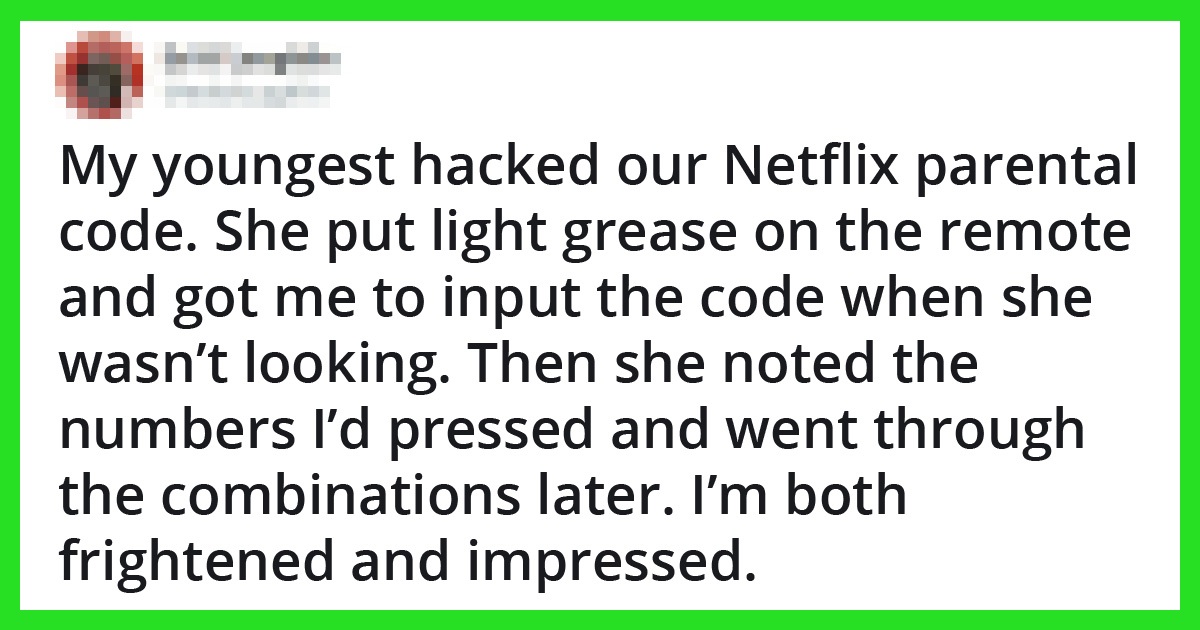 Children often surprise adults and parents with their actions and responses. We often think their minds are still very innocent and simple, that we won’t find anything too surprising from what they do. But it appears that a whole subreddit dedicated to smart kids with parents left speechless by them.

Have you ever tried asking an open-end question to children? Adults are human beings who are influenced by many things. The older we get, the harder it is to change our point of view. Hence, a child’s response often surprises people – they come from a human whose mind is fresh from influence.

He saved his dad.

“Today one of my 4th-grade students renamed himself “reconnecting …” on our Zoom call and pretended that he was having internet issues to avoid participating in our lesson.”

A child’s intellectual level has always been believed to be hereditary. This is the truth – but many people miss an even bigger factor that affects a child’s IQ level. William T. Dickens, a Ph.D. in economic studies, explained, “Genes get the credit for most of the work that the environment is doing.”

I told my 7-year-old kid to watch out for dog poop as she came out without shoes. She returned two minutes later like this.

My son made a maniacal laugh to himself after finishing his homework, muttering, “Ha, I win.”

My 5-year-old daughter drew me instead of asking directly as she knew I’d say no. She deserves an award.

Bet $5 with my kids that cereal packs don’t have ‘healthy’ word on them. I lost.

Told kids to clean up and they answered, “What’s the living room for? Living!”

Instead of relying on IQ tests, Prof. Linda S. Gottfredson from the University of Delaware thinks parents should not focus on scores more than the child’s actions. What is more important should be whether that child is interested in studying and shows curiosity while exploring new things.

I asked for a tablet holder and I got one made of LEGO with the word ‘Mom’ on it.

Son managed to walk out in two left shoes of his sneakers to school. But he didn’t panic and impressed me… as well scared me.

I asked my student to finish this maze. He deserves my applause.

My son, 8, made a Thanksgiving card. He’s very realistic.

It is also important that children get their necessary nutrition as they grow up. This starts from when they are still developing in the mother’s womb and after when they breastfeed. As they begin the transition to whole foods, parents have to help them love good foods and try everything. Bedtime story also helps stimulate their brain.

Son is not ready for bed and ‘hide’ to read his book.

I told my kid ‘no technology before 5 pm’ to make them do their homework before playing. He devised a ‘drive-in movie theatre’ for his car toys and streamed Netflix on his phone.

They really will do anything for what they want, when was the last you felt so eager to DIY your way out of a situation?