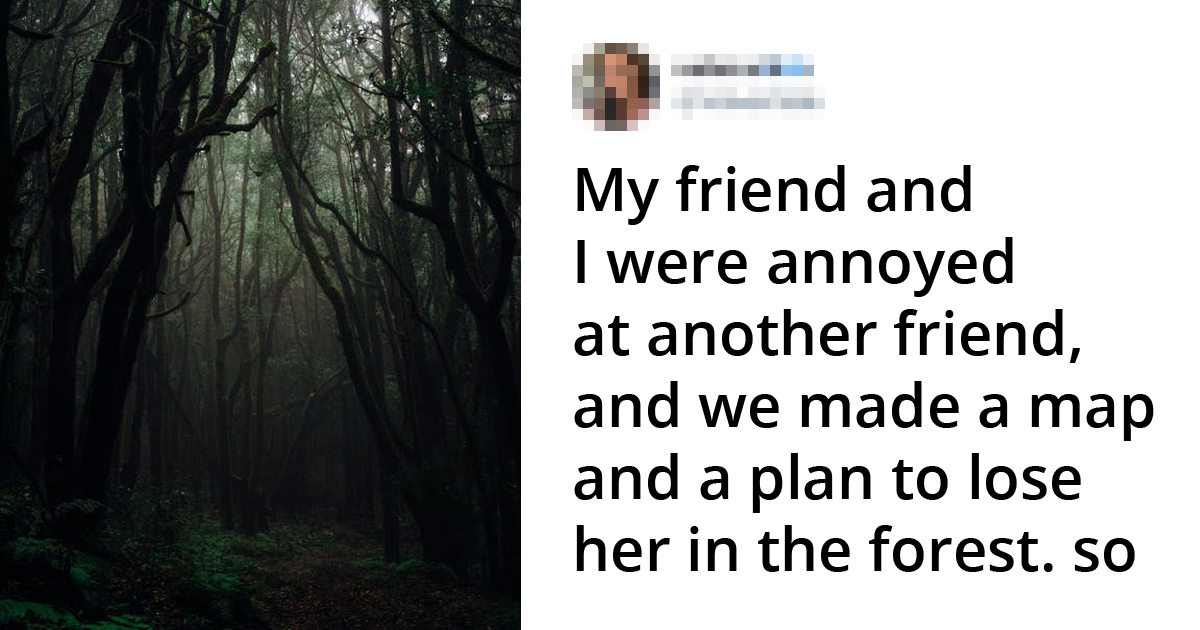 You can never be completely mad at kids. No matter how big of a problem they’ve made, they’re still kids. To begin with, just how huge of a problem can kids come up with, right?

Well, adults and parents may never have realized what impressionable 11-year-olds can do. They’re smart enough to go through with the things they plan but dumb enough not to consider the consequences. Their innocence also makes them completely oblivious to the gravity of the situation.

“When I was in fifth grade, me and my friends were talking at recess about what we wanted for Christmas. One of the kids was like, ‘Yeah, I get two Christmases now because my parents got divorced last year.’ So, my immediate thought was, ‘Wow, I want two Christmases.’ After school that day, I went home, made a Match.com account for my mom, and left it up on my dad’s work laptop. He checked his email that night, found it, packed my mom’s bags, and she went to a hotel room.

“I immediately felt regret, and the next day we had a family meeting with my brothers, and they told us they were getting a divorce. Seconds after they said that, I said it was me, and it was because I wanted two Christmases. My parents and my two older brothers did not look at me or talk to me for two months after. But I was 11.”

If you’re wondering, Ryan later answered in the comment section that his parents are still married to this day.

“So, my dad had to go return a library book. He left us waiting in the car; the car was running. My brother thought it would be hilarious to jump into the driver’s side seat, reverse out, and pick up my dad at the door, and be like, ‘Haha, we moved the car.’ No. As he was pulling out, he bangs into this minivan… like HARD. My dad’s car is fine; this minivan is f***ed on the side. We just put it back in the park, we jump back over to our seats, and we’re like, ‘Omg… We’re gonna be in so much trouble. What are we gonna do?’

“My dad gets back into the car, and we’re just silent. And as we’re pulling away, both of us looking at each other, this mom comes back to her minivan, and you can just hear her screaming.”

“My friend and I were annoyed at another friend, and we made a map and a plan to lose her in the forest. It was third or fourth grade, but still, that’s awful.”

“My older brother spent all day typing a research paper… Unfortunately for me, I deleted it.”

“When I was younger, I thought that I was in a TV show at all times…I would be in a normal situation, then I would look ‘off camera’ and be like, ‘Can you believe this is happening?’ — things like that.

“One time, in particular, my older brother spent all day typing a research paper, and he had to help my mom with something. So, my mom was like, ‘Liv, whatever you do, do not touch the computer.’ I was like, ‘Got it.’ The second they left the room, I went over and pretended I was gonna delete it because I’m the ‘evil sister’ in this TV show that I’ve created in my mind. Unfortunately for me, I f***ing deleted it. I’m sorry, Jeff.”

“‘Somebody put grease all over the playground. Several kids fell and got hurt.'”

“The next day, a newsletter came out to the school and was like, ‘Somebody put grease all over the playground. Several kids fell and got hurt’…and it was awful, but we were just trying to do Soap shoes stuff, and I never owned up to it until right this moment. And I’m so sorry. Sorry if you were one of those kids.”

“I flushed all the screws down the toilet. ‘Now they’ll learn not to leave things lying around.”

“I think I was 5. I went into a public restroom, and they must have been doing maintenance or something because there was stuff all over the floor — including screws. My child’s brain was like, ‘This looks important; they shouldn’t leave this lying around. What if somebody takes it?’ So, I flushed all the screws down the toilet. And I was like, ‘Now they’ll learn not to leave things lying around.'”

“She started gushing blood everywhere. I remember that.” TW!

“We were in grade school, and the teacher assigned us into these little groups, and we had to go in the hallway to work on this project… This girl in my group was sitting there and had a pencil, and she stuck it up her nose… trying to be funny or something… My body — it was a reaction, and I still feel bad to this day — my hand, I just went WHACK [and hit the pencil], and the pencil went up her nose.

“She started gushing blood everywhere. I remember that, and I still feel bad to this day, so I’m sorry.”

“I would go into stores that sold Webkinz and memorize the codes that came with them.”

“I’d go home and adopt the pets online with the codes that I memorized. Then, when people would buy them in the stores, it wouldn’t work when they went home because I already used the code.”

“This neighborhood kid stole my skateboard, and I asked his dad if he could come out and play. When he came out to play, I was waiting on a hill with a rock, and I chucked the rock in his general direction, hit him dead in the face, and broke his nose. It was horrible, and I’m sorry.”

“I brought a knife to school…”

“I was in the first-grade class, and I brought a knife to school — it was a play knife, like a plastic knife. We had just gotten to school, and I was unpacking my backpack, and I looked over at the boy next to me, and I was like, ‘Look what I’ve got.’ He told the teacher, and she grabbed me by the ear and dragged me to the office… I was in a lot of trouble, but… I turned out all right.”

“I had a massive crush on this boy named Timmy. I was mean to him for the rest of the year.”

“Fifth grade, I had a massive crush on this boy named Timmy. And we were playing that jump rope game where it’s like, ‘Who do you like? A, B, C, D,’ and so I purposefully landed on the T, because I liked Timmy. The entire class was like, ‘Ooo, Timmy!’ and I felt instant regret… So, I was mean to him for the rest of the year, and he had this best friend, Jake, so I was mean to Jake, too.

“At one point, I told Jake — I feel really bad even saying it out loud — ‘You know, you’re so ugly that your mom has to put a paper bag over your head before she kisses you goodnight.’ He said, ‘My mom doesn’t kiss me goodnight.’ And I said, ‘Exactly.'”

“I was kind of the shy dork, didn’t talk to anyone. I was in first or second grade; this kid asked me at recess to double knot his shoes. Like, I knew he meant, ‘Would you just tie my shoes in a bow and then knot the bow?’ But for me, I was such a jerk — I literally took his shoelaces and tied them to double… to really tight knots that he could not get out… And the rest of the laces were just hanging there all floppy. And he looked at me and just said, ‘Okay, thanks.’ And he didn’t know that I did it wrong. I knew it was so rude to do, and I still to this day feel so bad.”

“I was stealing from a fundraiser that was feeding other kids.”

“I was in junior high, and we had this fundraiser where it was basically just a blind bag. If you gave them a dollar, you got to reach in and get a Starbust. The odds were weighted so that most people just got pink and all they got was the Starburst, but for orange, you got your money back. If you got a red, you got two dollars, and if you got a yellow, you got ten dollars.

“That school also had a vending machine where you could get a whole pack of Starburst for one dollar, so I did that with my first dollar instead, and I put a yellow in my sleeve so that when I reached into the bag, I always got the ten dollars. They were like, ‘This kid is so lucky!'”