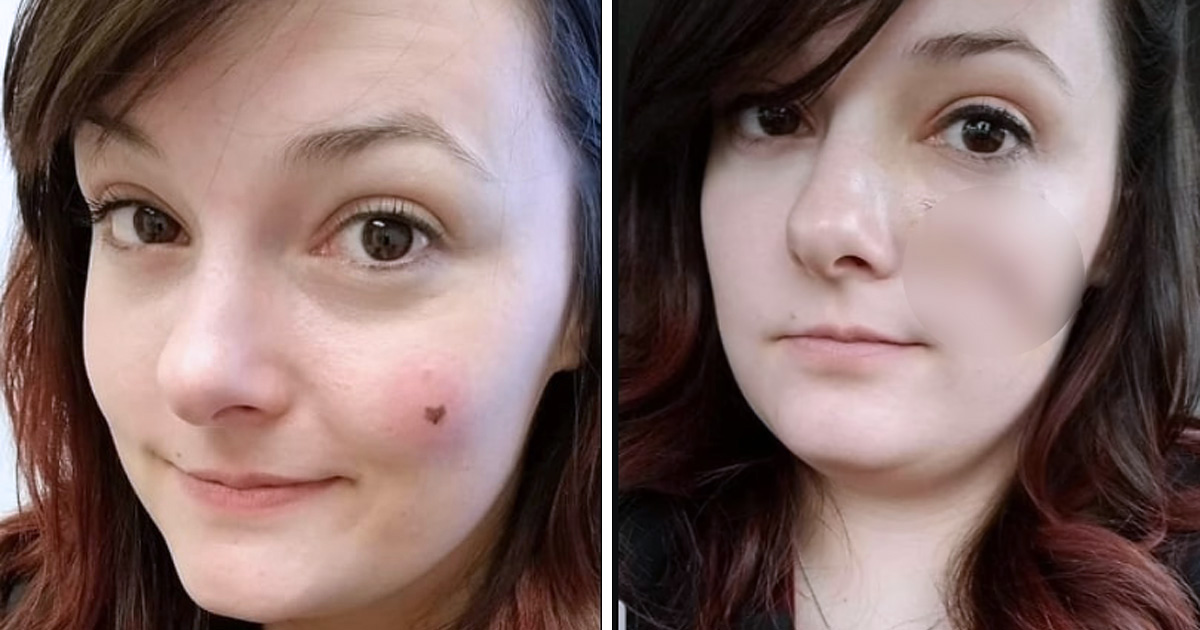 Kayla Mailer, a stage manager, and secretary from Portland, Oregon, has urged people not toil with sunscreen. This comes after she discovered that her super-cute heart-shaped freckle on her cheek was indeed a skin cancer. Since age 12, Kayla has had it on her left cheek, and over fifteen years, it transformed into a perfect heart shape.

Kayla Mailer’s super cute freckle on her face was actually had a “highly aggressive” form of melanoma.

She first noticed the freckle at the age of 12, and over the next decade or so, it formed a perfect heart shape mark.

It was undeniably a unique mark, and according to Kayla, people regularly complimented it while thinking it was a tattoo. Just when she turned 27, the mark turned a darker color and lost its distinctive shape. This made Kayla visit the doctor, a dermatologist [on Nov. 13th, 2017] who whipped off the freckle for a biopsy.

Not too long, the mark lost its distinctive heart shape and began to turn darker.

Mailer became concerned after noticing the changes and visited a dermatologist to have it assessed.

Thankfully, Kayla eventually underwent surgery to remove the melanoma, which was successful.

Days later [ on Nov. 16, 2017], Kayla claimed she was given the heartbreaking news that the mark was a highly aggressive form of melanoma. As quickly as she could, she underwent surgery where they filleted off her skin layer by layer, leaving her with a pepperoni-sized hole on her face. And after the cancer was no more, she underwent plastic surgery to close the gaping wound.

She also subsequently had plastic surgery to close the wound.

Now cancer-free, the now 32-Year-Old is sharing her experience and urging people always to wear sunscreen. According to Daily Mail, Kayla explained: “If I hadn’t removed it, I would have died when I was 28-years-old. I didn’t tan a lot before the diagnosis, but when I was a kid, I was running around Alabama, usually with no sunscreen, or at least not reapplied every two hours.”

She has also urged people always to wear sunscreen!

“Get suspicious things checked by a professional. Live a life you love, and love the life you live.” She advised.

“When I got the call from the dermatologist saying I had a highly aggressive form of melanoma, I was getting ready to go to work a 12-hour night shift at the jail. I sobbed in my bathroom and [from then on] had constant anxiety about dying”

So far, Kayla gets her skin checked every six months and has had several freckles removed as a precaution.

However, three years since the surgery, Kayla has skin cheeks every 6months and has subsequently had freckles removed from her back, neck, right arm, and two on her face as a precaution. “I would advise people to wear sunscreen, reapply every two hours – and/or wear protective clothing. Get suspicious things checked by a professional. Live a life you love, and love the life you live.” Kayla insisted.

Pictured here is Kayla at 16-years-old. It wasn’t long after that the freckle first appeared on her cheek.

Here at 17, the freckle was a small, circular shape, different from the heart-shaped mark that developed.