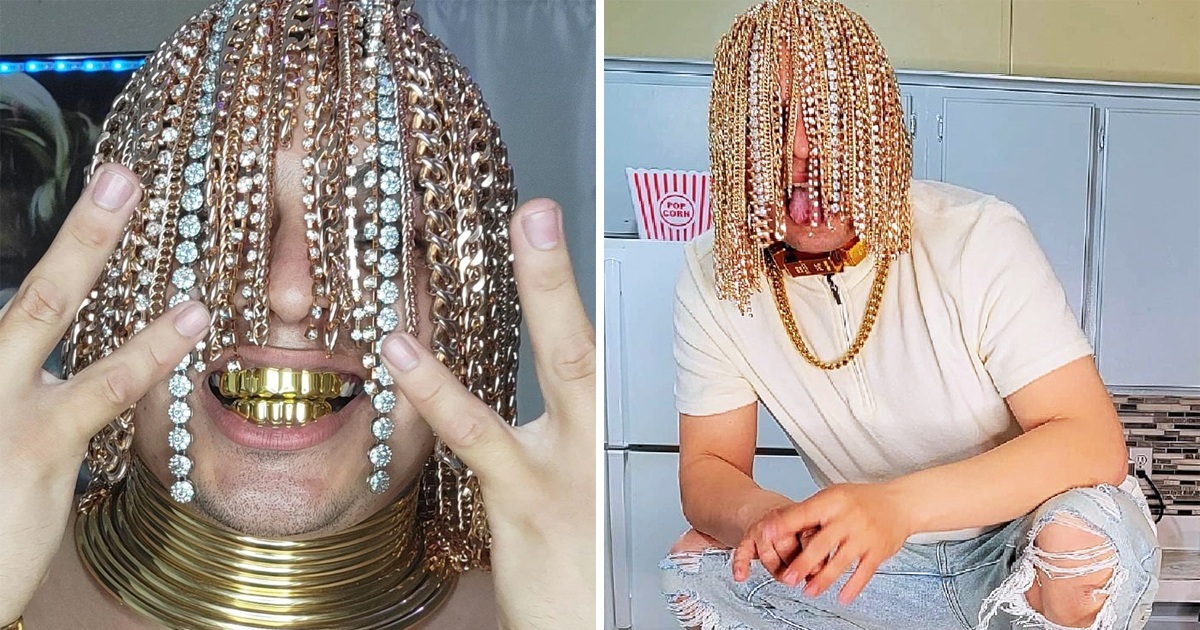 Music artist Dan Sur now has gold chains for hair! The rapper who cruises Latin music with reggaeton underwent cosmetic surgery to have gold hooks implanted, from which he now dangles even more gold chains. Dan Sur has been showing off the bizarre new headpiece to his nearly two million followers on TikTok.

There’s no idea how much the golden dreadlocks are worth, but Dan Sur is clearly rocking it.

MTO News reported that the artist installed loads of hooks all over his noggin to attach the chains. Speaking in one of his TikTok videos, Sur explained how he wanted to look like he’d walked straight out of a jewelry store. “The truth is that I wanted to do something different because I see that everyone dyes their hair,”  Sur said.

The artist installed loads of hooks all over his noggin to attach the chains. Aren’t you stunned?

He added: “I hope not everyone copies me now. I have it as a hook implanted in my head, and that hook has hooks, and they are all hooked in my skull, under my skin. This is my hair. Golden hair. The first rapper to have gold hair implanted in human history.”

In a TikTok clip, Sur explained how he wanted to look like he’d walked “straight out of a jewelry store.”

Caracol TV had in April 2021 reported the rapper underwent surgery. And as a result, the rapper’s following witnessed a shoot up; tens of thousands on Instagram. On his TikTok, the rapper mainly shares music clips, videos of responding to questions from fans, playing in the backyard, and recording new music.

So far, he’s now the first rapper to have gold hair implanted in human history. Who’s next?

However, it turned out Sur isn’t the only one who had got bling attached to their bodies. Lil Uzi Vert went viral earlier this year when he shared how he had spent millions of dollars to acquire a pink diamond. Vert got it surgically implanted; however, he nearly lost it during a recent appearance at a music festival.

This comes after Lil Uzi Vert revealed he had spent millions of dollars to acquire a pink diamond.

In particular, he had jumped into the crowd at Rolling Loud Festival in Miami, and the diamond he claimed to have purchased for $24m dislodged from his forehead. But thankfully, he reportedly still has the diamond. On the other hand, his fans had understandably wondered how safe it is to have such a large and complex piercing so close to the brain.