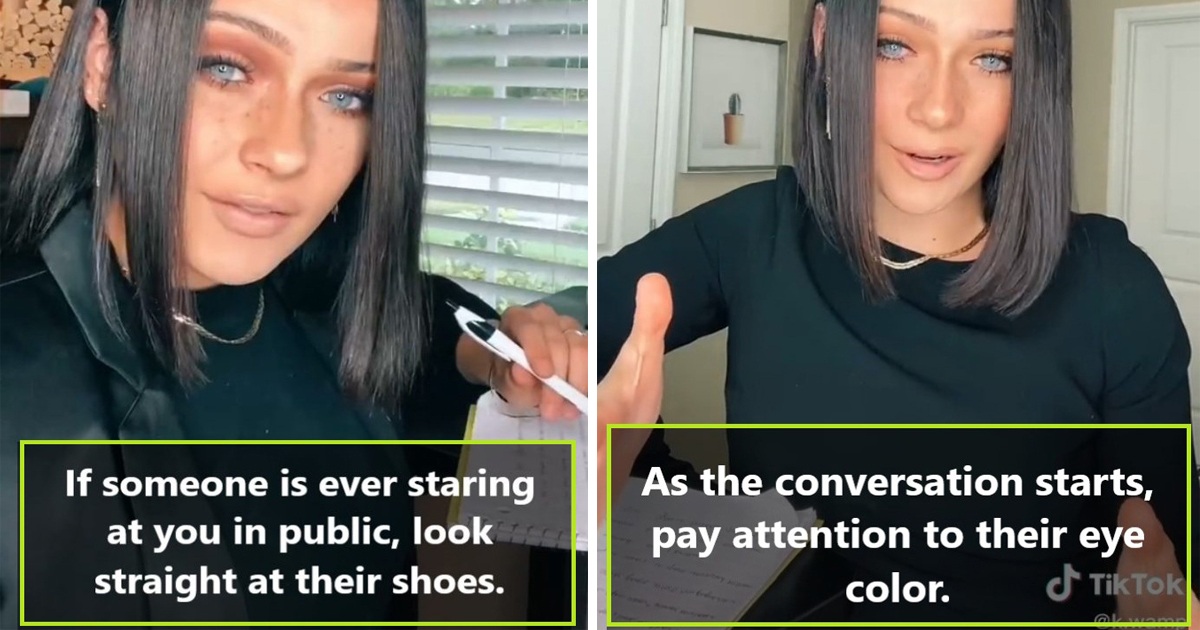 Psychological warfare is real and happens all the time, even when you don’t realize it. It doesn’t have to be in a ‘manipulative’ sense. Psychology can also be subtle aggression that pushes people away from your personal space or protects yourself from being dominated by the other party.

Karissa Wampler is a mental health coach and TikToker who recently started a 10-Day series for how one can use psychology to their advantage. Her tips are simple but based on actual tips from professionals of many fields who’ve done these things.

“If somebody is ever staring at you in public, don’t acknowledge them, but look straight at their shoes and don’t look away. Without even acknowledging them, you will make them so uncomfortable and concerned with what’s wrong with their shoes they will either turn away from you or walk away completely.”

“Want to throw someone off? Next time somebody is trying to manipulate you, look at their forehead mid-conversation. It makes the subconscious incredibly uncomfortable. Switch between looking at their eyes and their forehead. They’ll either end the conversation completely or lose their train of thought.”

“A tactic used in business, sales, and law that has probably been used on you. If you are pitching an idea or delivering an argument that you want someone else to accept, nod subtly while you deliver your main points. Mirroring is a natural human behavior. People will naturally nod along with you, making them more likely to agree with you and give you an affirmative answer.”

“Next time you meet someone, and you want to make a good impression, try this: as the conversation starts, pay attention to their eye color. Not only will this ease some anxiety that you might have surrounding the conversation, it will naturally lead you to hold eye contact longer and give you something to remember about this person.”

“If you want people to trust you, be open and honest about your minor mistakes. The times that you do really stupid stuff, like wear your shirt backward. People who we see as perfect threaten and intimidate us. So, when you are open about these small details, it helps others to see that you are a safe, honest person that they can share their imperfections with. It sends the subconscious message that you are safe and trustworthy, and they can be real with you.”

“You actually have to be very careful how you talk about people who aren’t in the room when you’re with friends. And here’s why. It might seem harmless to talk poorly about people because they’ll never know, but you’re actually sending the subconscious message to your friends that you’ll talk poorly about them when they are not with you. So, be careful that you don’t sabotage yourself to make conversation.”

“Next time you’re stuck in a conversation you don’t want to be having, here’s what you’re going to do: instead of making up a lame excuse or just walking away, you can actually use psychology to make them end the conversation for you. While you’re talking, switch among looking at the left and right eyes and the forehead. Looking at the forehead makes the subconscious incredibly uncomfortable, which will lead people to believe that they need to exit the conversation. And you don’t have to say anything.”

“Next time someone tells you something that you’re already aware of, do everything you can to refrain from saying ‘I know.’ Not only does it devalue what they are saying, but it can trigger a defense response. To avoid that altogether, simply replace it with ‘you’re right.’”

“Next time somebody is upset with you, and they are going to get aggressive, but you want them to go a little easier on you, position yourself directly next to them. It’s been proven that confrontation is much more difficult when you are in such close proximity, so sit next to your angry boss, or mom.”