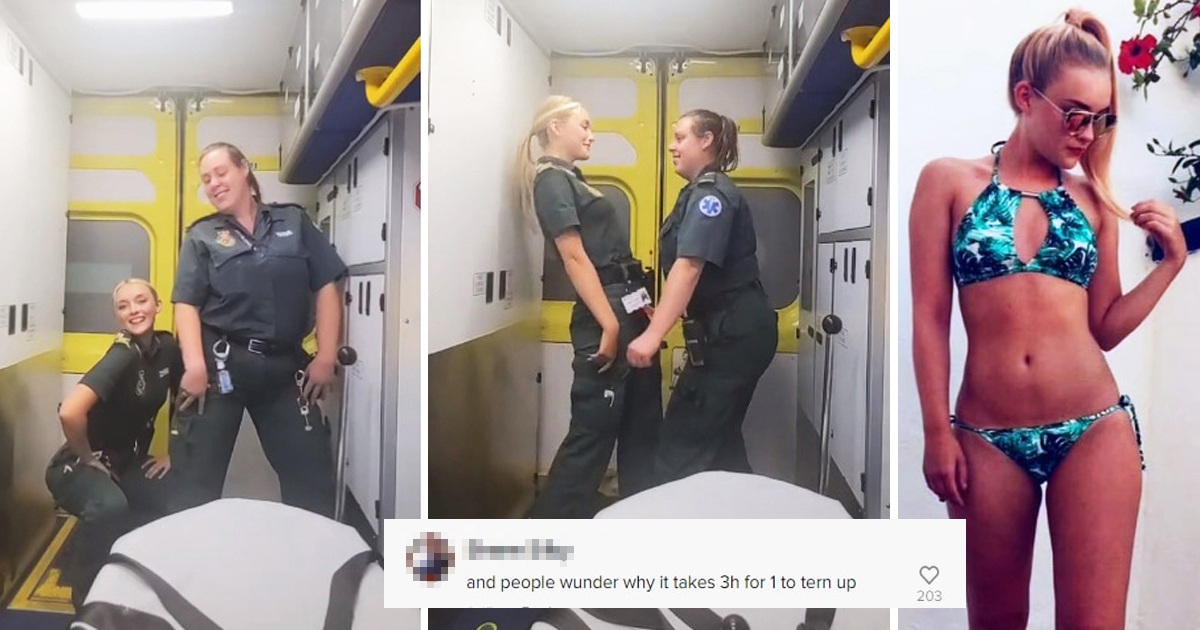 While on duty for Yorkshire Ambulance Service, Rhianna Higgins and colleague Hattie Proctor spent their break boogying to a remix of Justin Bieber’s song Baby in the back of their vehicle. 25-Year-Old Rhianna from Doncaster, South Yorkshire, shared the clip to TikTok with the caption: “Little boogie on break,” with the hashtag #999 #emergency and #uniform.

The fully uniformed workers were seen doing a dance routine in the back of what seems to be an ambulance.

Sharing the clip that shows the uniformed paramedics performing a dance routine in the back of an ambulance, it’s been met with divided opinions. The video prompted people to instantly share their displeasure and write negative feedback in the comments.

The clip (below) has been viewed more than 250K times and has divided opinions.

“Wow, god help us all if we call 999 when all they think about is TikTok.” One person wrote. Another asked: “Shouldn’t you be saving lives.” While a third said: “And people wonder why it takes three hours for one to turn up.” However, a few people claimed the dance made them happy.

“Great video, clearly states they were on a break! Probably trying to relax after saving a life.” One person said. A second weighed in full support, stating: “They’re on a break, can’t fault them. 8 minutes to get my dad and save his life 8 times over. Massive respect to ambulance services!” So far, Rhianna nor Hattie has addressed the comments.

A few defended the YAS staff.

But other clips as shared on Rhianna’s media pages feature fellow paramedics dancing and emergency vehicles in the background. For comment on the subject matter, YAS’ staff social media policy, according to the recently shared document online, says that: “At no time will using social media be allowed to take priority for the staff member; their treatment of patients and the day job will always come first.”

Rhianna had uploaded the video to TikTok with the caption: “Little boogie on break.”

It added: “If a member of staff discloses they work for YAS, they should ensure their profile and related content is consistent with how the Trust would expect them to present themselves at work.” However, the Yorkshire Ambulance Service NHS Trust serves over 5 million people and employs 4500 staff and 1000 volunteers. On an average year, YAS handles 700K emergency calls and conducts 1milion patient transport journeys.

However, another video shared by Rhianna featured fellow paramedics and an emergency vehicle in the background.