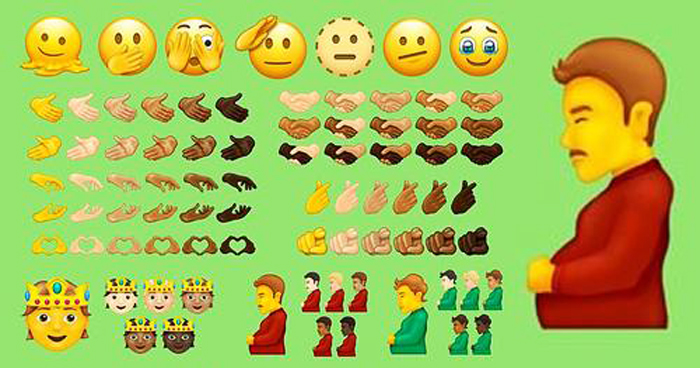 New Emojis To Include ‘Pregnant Man’ As Latest Designs Are Unveiled

2022 will possibly witness the release of 107 new emojis, including a pregnant man, finger hearts, gender-neutral characters, a hand gesture popularized by K-pop stars, and even a face holding back tears. Emojipedia, a part of the Unicode Consortium, the central bank of all approved emojis, has recommended the emojis for release, but a final decision will occur this September.

A gender-neutral person, kidney beans, and a pregnant man are among the emojis coming to smartphones.

The Emoji version 14.0 also includes a disco ball, a troll with a cub, a low battery, a dotted line face, a saluting face, kidney beans, and a slide. Emojipedia has claimed the pregnant man or person recognizes that pregnancy is possible for some transgender men and non-binary people, while the gender-neutral person wearing a crown comes in a range of different skin tones.

With #WorldEmojiDay slated for July 17, Emojipedia wants people to have a look at what the next emoji update might offer.

Emojipedia has since highlighted the new additions before World Emoji Day, which holds today, July 17th. “As this is only a draft emoji list, each emoji is subject to change prior to final approval in September 2021,” Emojipedia said on its website. It added: “Expect to see more about this later in the year when the final version of Unicode 14.0 and Emoji 14.0 is released on Sept. 14th.”

However, each emoji is subject to change prior to final approval in September 2021.

Companies, including Google, Microsoft, and Apple, apply stylized versions of the consortium’s designs to their own operating systems. But no release dates have been confirmed for the emoji on different operating systems. However, Emojipedia has all the Emoji 14.0 designs listed with their names on its website, including old emojis included in previous installments.