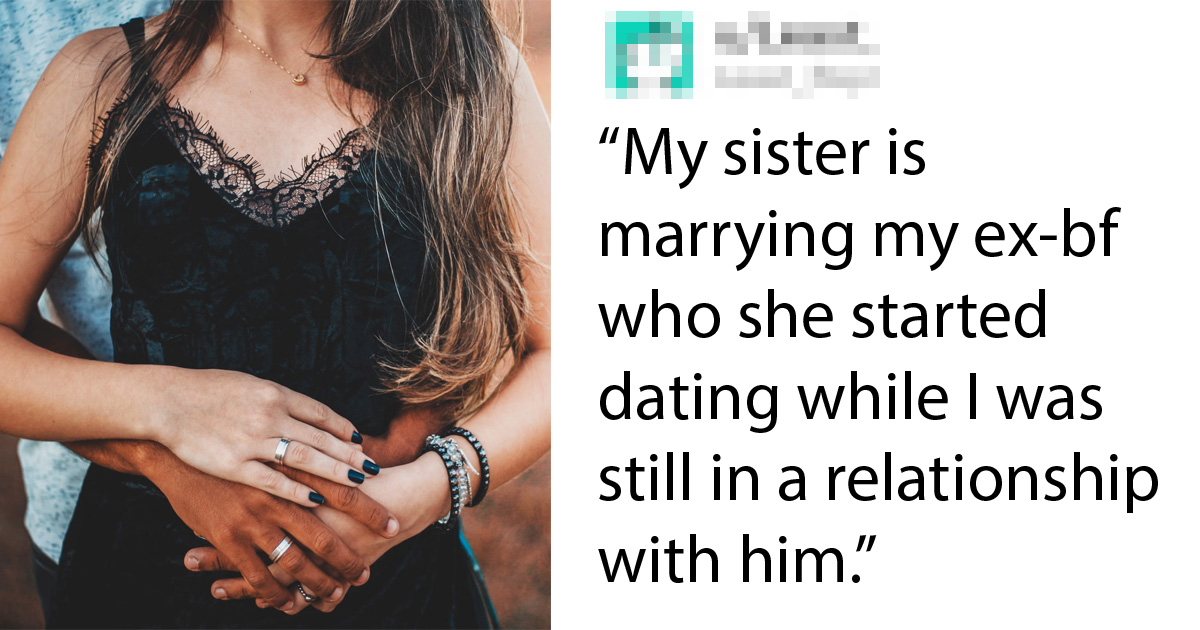 ‘My Sister is Pregnant And Marrying My Ex-Boyfriend, And My Mom Wants Me To Attend The Wedding’

A scorned woman is under pressure from her own family to attend the sister’s wedding – against her own ex-boyfriend.

The unknown woman complained on Reddit this week that her sister is about to marry a man she first went out with.

What’s even worse, the Redditor was still in a three-year-old relationship with the man when he cheated on her with her sister. Two years into their courtship, they are tying the known and even have a child on the way.

The Redditor said she refuses to go to her sister’s upcoming wedding to her own ex-boyfriend, two years after the pair had an affair behind her back. Who could blame her, though?

‘My sister is marrying my ex-bf, who she started dating while I was still in a relationship with him,’ she wrote.

In the comments, she explained that they had been together for two years, the last six months of which he was secretly having an affair with her sister.

‘Yes, I know my ex was a scumbag too, but honestly, it hurts more my own sister did this to me over his cheating lying a**.’

After the initial betrayal, the Redditor said, her whole family was on her side and respected that she wanted nothing to do with her sister or her ex.

But now, the sister and ex are getting married — and the sister is expecting her first child, their parents’ first grandchild.

‘My mum is saying I should let the past stay in the past and move on,’ the Redditor wrote. ‘That future niece deserves to have a loving extended family and a loving aunt.’

But, she went on, ‘I don’t want to play happy families and let it go. And I’ve staunchly refused to go to their wedding. The wedding is a celebration of the couple, and I have 0 interest in celebrating their love.’

‘[My sister] broke my trust in a way I honestly feel like I can’t recover from,’ she added in a comment. ‘I’m seeing a therapist, and she agrees that it’s healthier for me mentally to just cut her out of my life. I just can’t let it go that she did this to me.’

Hundreds of other Redditors chimed in with words of support.

‘Most of the time, I’d say, “Let bygones be bygones,” but this is too much. I’m not sure I’d have any relationship with her if I were you,’ wrote one.

‘I love it when people say ‘Just get over it!’ like there’s some way you can forget that your boyfriend and your sister betrayed your trust and lied to you. People who do stuff like that don’t deserve to have the past wiped clean and shiny by the birth of a child,’ said another.

‘I have a brother who cheated with and impregnated my girlfriend while I was away at school,’ he said.

‘Same deal, the family was on my side until the marriage came up then the pressure to make up started. Not only did I refuse, I completely left the state and moved across the country.

‘It’s been a decade, I’m happily married, and we have a child of our own,’ he went on. ‘I left to protect myself and found life and love that embraced me without asking me to break in half for them.’