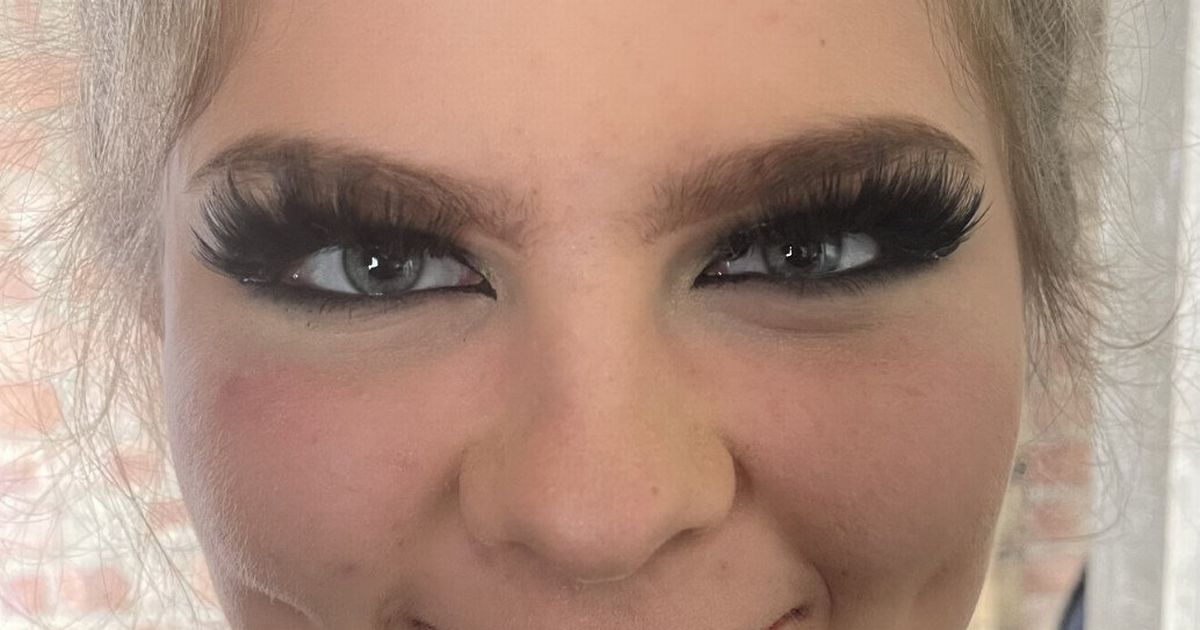 Angela Jackson is in a brawl with Royal Wootton Bassett Academy. This comes after her daughter, 14, was left in tears at being forced to remove her fake eyelashes in class. Angela has since dubbed the school ‘pathetic,’ claiming that a teacher stood over Chelsea Silk in a school toilet while peeling off the lashes against school dressing rules.

In response, Angela, a Kennel assistant and volunteer for dog rescue charities, has claimed she’s sending Chelsea to class every day wearing the big lashes; despite the school informing her, she will face isolation if she continues to wear them. But of course, Angela remains adamant that she won’t back down over what she named ‘Lashgate.’

Chelsea Silk, 14, was stood over in a school toilet after turning up at school wearing false eye lashes.

“I went in to pick her up, and she was very upset because someone stood over at the basin until she took them off. I will not back down on this, and she will keep going to school wearing the eyelashes. It means that she will be in the isolation unit. She has never been in there before for anything and has never had a detention.” Angela, according to Daily Record, explained.

She continued: “I don’t see how wearing false eyelashes impacts her school work. I took photographs of her wearing one set of false lashes as she does for the school and another of her wearing two. I accept that wearing two sets would be inappropriate, but I can’t see that the one set can cause any problems.” Angele insists that Chelsea will continue to wear them unless the school rules are explicitly reworded to ban the wearing of eyelashes.

Angela, who has two other children at the same school and a son who left Year 11 2020, noted that she would make a stand against the school’s pathetic policy and stand alongside all of the female students of Royal Wootton Bassett Academy that wish to wear false eyelashes to enhance their natural attributes and boost their self-esteem.

Her mother, Angela Jackson, insisted Chelsea will continue to wear them unless the school rules are explicitly reworded to ban the wear of eyelashes.

At the moment, Angela is concerned that while her daughter is in isolation, she is missing out on essential practical work in preparation for next year’s GCSE exams. The school’s uniform policy said that make-up should be kept to a minimum and only neutral tones. It also said no nail varnish, gel nails, or artificial nails might be worn.

But, as Angela said on the school’s website, false lashes aren’t specifically mentioned. So far, Angela’s protest has sparked criticism on social media, with many people agreeing with the school’s strict uniform policy. “I am sure you can live without false eyelashes for a few hours.” One person wrote. A second added: “I wouldn’t risk my child’s education in her GCSE year.”

Another added: “Always believed uniform. Discipline is a key part of education. It doesn’t set a good example of going against policy. It makes a child spoilt. You don’t go to a job wearing something unnecessary. School is for learning. It’s not a fashion parade.”

Many people appear to agree with the school’s strict uniform policy.

The Deputy Head of Royal Wootton Bassett Academy, Mari Roberts, has also responded: “The school is aware that the mother does not support us right now, but we have spent time working with her and her daughter to de-escalate the situation. The school adopts an empathetic inclusive approach to individual student needs as is the case in this instance.”

“Our Behavior for the learning school system was in place pre-COVID, and we have not changed any of the high expectations we have of our students. We provide stability and consistency for our students and families in a time of COVID instability. The majority of our parent body support us, making us an extremely popular school.”