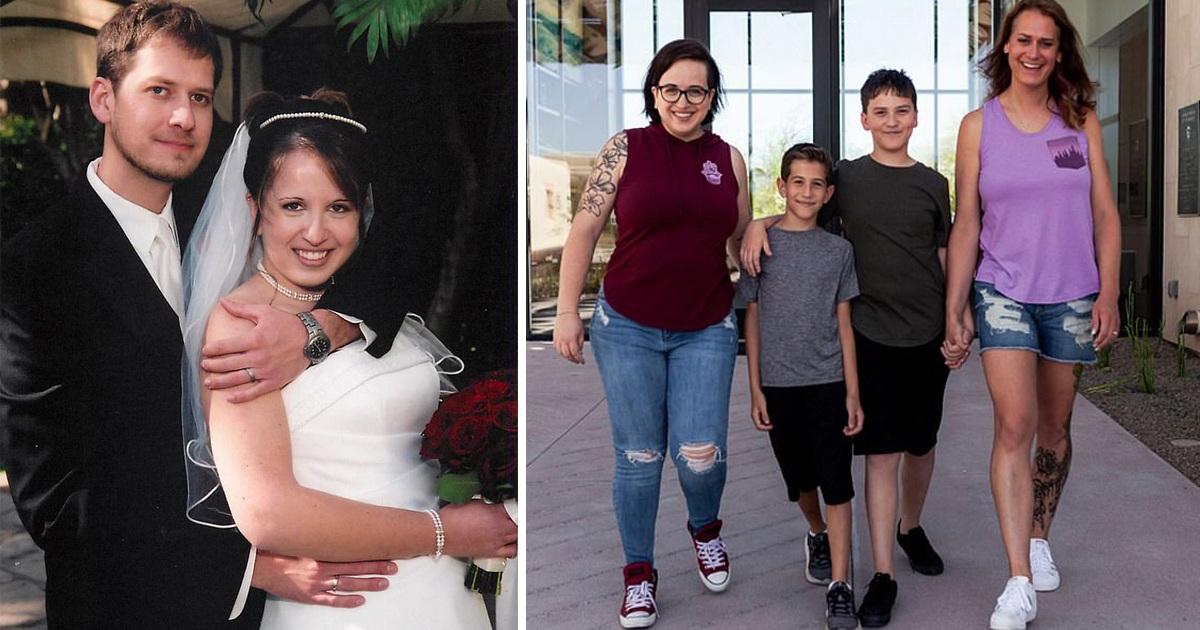 Jenni and Sarah Barrett had probably never imagined in their whole life that they’ll become a happy gay couple with biological kids. At least, when Sarah still goes by the name Sean, he was a happy husband married to the love of his life 15 years ago.

The happy couple are parents to two beautiful boys, Morgan and Toby, who are 13 and 11 years old.

The two are teachers from Phoenix, Arizona and dropped the bomb on each other on the very same night. It turns out the bomb wasn’t really a bad one – Sean admitted to Jenni that he might be trans, but to Jenni’s relieve, she could come out as gay without hurting anyone.

The two happy women now likes to post about how love can really conquer all and how they ‘survive a transition’, quite literally it seems. Jenni said, “Sarah rolled over one evening in bed in 2016 and told me, ‘I really need to talk to you – I think I’m trans.'”

She added, “I’d come to realize why I’d always been so drawn to her, it was because of who she was on the inside – a woman – and not her shell. I turned around and said, ‘That’s ok – I think I’m gay.'”

The two met and Sarah fell in love on first sight. “We met through a friend at Arizona State University where we were training to be teachers,” Jenni told the story.

“Sarah – who went by Sean back then – had a crush on me straight away, but unfortunately I was taken. Three years later, when he found out I’d broken up with my ex, he got our friend to throw a house party so we could meet. We always joke that he was my stalker, but really we’ve been inseparable ever since.”

The two is a really cute pair! They’re totally head over heels for each other, with Jenni recalling, “I told myself I’d play hard to get after he left a voicemail trying to set up a second date. I waited 20 minutes before calling him back – that’s how hard I was to get.”

They finally took time in April 2004 to split time between Jenni’s and Sarah’s family homes. Two months later, Sarah had found the confidence to propose her to become her lifelong partner.

“Sarah took me to a pretty vantage point overlooking Mount Mingus in the Black Hills of Yavapai County – a large mountain range in central Arizona. We had a picnic, with cheese and wine, and when I turned back from admiring the view, there was a red rose with an engagement ring on it.”

They moved in together in September on the same year to finish their studies and eventually become husband and wife on December 18, 2005. Even then, Jenni didn’t think that Sarah had a gender confusion, but looking back she’s now recalling some signs.

“I didn’t clock it at the time, but looking back at the wedding, Sarah was a bit of a bridezilla. I was happy to elope and get married just us two, but she organised every part of the big day, from tableware to the venue – all I did was try on the dress and turn up.

The family was happy, but Jenni could feel the sadness in Sarah. Pictured Sarah recovering from breast augmentation.

“I’ve since learnt that Sarah has always had a strong desire to wear women’s clothing, but that she felt ashamed. She would try on her mum’s bikini or her sister’s clothes, but always in secret. After she came to college, she suppressed those desires,” Jenni explained.

She continued, “Sarah would come home with a pair of silk pajamas, clearly for women, and ask if it was weird if she wore them. She started buying a lot of clothes like that, which were on the edge of what is seen as male or female.”

“She would wear a nightie to bed and on date nights she’d be wearing countless layers of clothes with a bra underneath, so no one could see. I noticed something going on, but it wasn’t hurting anybody so I left it. Slowly, she started replacing her boxer shorts with women’s lingerie – after a while getting rid of all her men’s underwear.”

Jenni said, “‘I didn’t say anything though. It was as if we’d both silently agreed not to discuss it – maybe it was some sort of survival method, who knows?”

Jenni said their wardrobe was filled with women clothing after years and a lot of them weren’t to Jenni’s style or taste. Such as a pink, strappy satin top that they always kept in the wardrobe and she never wore it.

Back in 2012, Sarah was teaching from home and Jenni knew that she’d go grab the heels and dress or skirt to wear while teach. The kids can’t see what he was wearing, but she knew the wardrobe full of women’s clothing will have to be worn somewhere.

“There were clues, too. I’d be doing the laundry and there would be women’s clothes that I definitely hadn’t worn – so I knew Sarah must have been wearing them. People never believe it, but I can honestly say that I never felt any betrayal or sense of being lied to,” said Jenni who may have realized that Sarah could be a trans.

Another hilarious bit of the story was when the two would Google about their situations. Jenni looked up, “Is my partner transgender?” while Sarah looked up, “Am I trans?”

The situation got pretty dark at one point because the parents began realizing their eldest son Morgan could be gay. It pushed Sarah to think about being honest about himself to everyone. Because only then can his own son be honest with him and feel comfortable in his life.

The kids took it pretty good!

Jenni said, “Kids don’t over-complicate things. We explained that Daddy had a girl’s brain and that it was in the wrong body – but doctors would fix it. Toby took it really well.

“But Morgan was upset for a while, maybe as he was confused, too. He was crying in bed that same night, but when Sarah promised they could still play Minecraft together he was fine!

The family revealed their current status as soon as Sarah was given the green light to transition in May 2017, just hours before they got on a plane for a 10-day family vacation.

They began hormone therapy on July 17, 2017, had a breast augmentation in October 2018 that cost $4,400, but their gender confirmation surgery that was scheduled for June had to be push back to next year due to the pandemic.

Sarah shared how she feels now, “I used to hate looking at my body and never wanted to see myself naked. Now I finally like what I see – apart from one part. There’s no rule book to being trans, but this is something I know I need to do. And it’s fantastic to know that Jenni and our boys will support me all the way.”