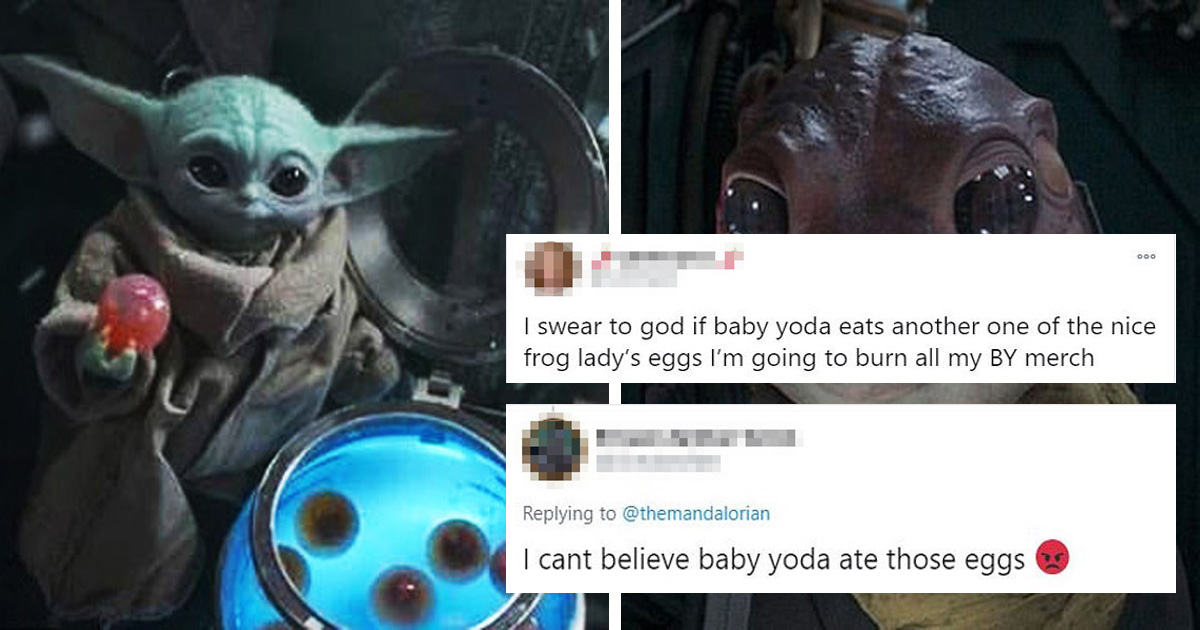 Baby Yoda, who a year ago cozied into the hearts of Star Wars Fans with his adorable cooing, bottomless eyes, and fuzzy head, has invoked social media wrath following last week’s episode of the Mandalorian. The mystical infant had remorselessly snacked on the eggs on Frog Lady, an endangered galactic species.

You will agree that one of the best things to come out of the Disney Universe is The Mandalorian, as it gives an incredible look at a different aspect of the Star Wars realm. Everything had been going on well for Baby Yoda – he was a selling toy, and he was equally saving the galaxy using his tiny force powers.

Precisely, in Season 2 Episode 10: The Passenger, Mando had agreed to take a frog lady and her jar of unfertilized eggs on a road trip from Tatooine to Trask, where her husband is making them a homestead. Baby Yoda took a liking to the eggs and throughout the episode snacks on them. According to Frog Lady, the eggs are the last brood of her life cycle, and her husband had risked his life to carve out an existence on the only planet that was hospitable to their species.

Both Frog Lady and her husband had fought too hard to resign themselves into the extinction, but it turned out Baby Yoda went deaf hears to her story, a big thanks to hunger. The episode ended before the Frog Lady met with her husband; hence it uncertain if she successfully got any of the eggs fertilized. However, the whole episode had a divided response – some fans found it funny while a few found it disturbing, accusing Baby Yoda of committing genocide.

‘Me trying to explain to my children that Baby Yoda eating those eggs isn’t cute; it’s genocide.’ @ThatKevinSmith, a filmmaker said. A viewer added: ‘I swear to God if Baby Yoda eats another one of the nice frog lady’s eggs I will burn all my By Merch.’

A third stated: ‘The decision to make Baby Yoda ingest the eggs of a sentient creature desperately trying to continue its family line in the wake of a genocide is… well it’s a lot.’ Other Twitter users called Baby Yoda a disappointment and a**hole, while some people felt the public outcry was a bit over the top.

Nevertheless, the Lucasfilm creative art manager, Phil Szostak, revealed the controversial scenes’ aim and defended it. He tweeted that baby Yoda eating the eggs was intentionally disturbing and used for a comedic effect. On the other hand, could this be a hint to Baby Yoda being a villain in the series?