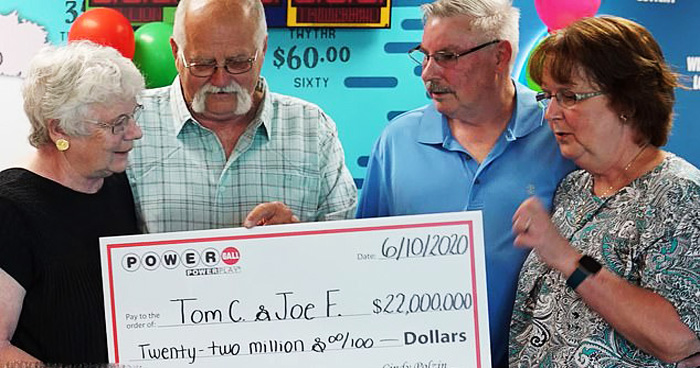 The latest Wisconsin Powerball winner has decided to split his luck with a friend because they made a 1992 handshake deal of it. Thomas Cook got his winning lottery ticket at a gas station in Menomonie. He remembers his pal Joseph Feeney who has also been buying lottery tickets for years.

Cook showed the lottery number to his wife and then called his old friend after fully understanding he won the lottery. Feeney recalled, “I said, “Are you jerking my bobber?”

The two friends went to Wisconsin Lottery in Madison with their wives.

Cook from Elk Mound said, “It was quite an experience when I read those first two or three numbers. I kind of froze and handed them to her and she froze.”

He took two weeks off from work and insisted with his handshake deal he made in 1992 to split the money if he ever win the lottery. He said, “We can pursue what we feel comfortable with. I can’t think of a better way to retire.”

Meanwhile Feeney from Menomonie was already a retired man from area fire department. Both he and Cook didn’t have a specific wish in mind, but they definitely will enjoy their retirement plan.

Check out the interview video below!