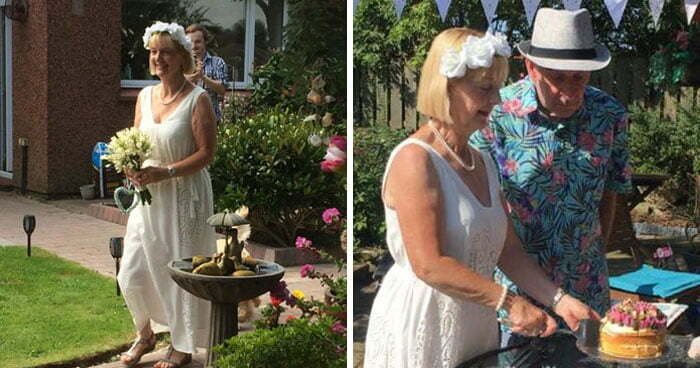 Dementia is a medical condition that has to do with the diminishing of the brain functionalities. Majorly, dementia inhibits a person’s ability to think properly and remember essential events, occurrences, and memories.

Dementia can be a difficult situation for both the person suffering from the condition directly as well as those around the person. This is because people around a dementia patient over time begin to suffer the pain and heartbreak of being forgotten by their loved ones.

Anne’s husband Bill has been suffering from dementia for the past 9 years. Over time, the condition has made Bill forget the name of his wife. As heartbreaking as this can be, Anne has stayed all along with Bill showering him with all the love she could until recently when she received an amazing surprise from Bill.

Anne who took to social media to express this amazing surprise revealed that her husband of over 12 years who has been battling with dementia could no longer remember he was married.

Though heartbreaking, she was surprised when Bill said he really likes her and would love to spend the rest of his life with her. It was certainly an emotional moment of hugs and kisses as she accepted his proposal.

According to Anne, she hoped Bill would have forgotten by Friday as the proposal took place on Thursday, however, Bill remembered. Anne’s daughter Andrea convinced her mother to get a gown so it could really look like a wedding.

Anne got a special cake while her cousin Lynne brought flowers for Anne’s hair and Eva prepared their marriage renewal vows. The following day Anne and Bill got married again under an amazing atmosphere with friends and family all present.

While Bill does not have a memory of their past, his presence aided by the deep love he feels for Anne has shaped their lives for a new path.

Despite the fact that battling with dementia can be very challenging, however, with care and support from families and friends, a dementia patient can have a wonderful life just like Anne and Bill.

Do not forget to care and support people living with dementia because they are still the same people you know. Always remember that not loving them can only aggravate their situation.

Anne understands this very well, that’s why the couple established the “Boogie in the Bar” concept that holds dances for a dementia patient.

Here’s How People Reacted To Their Love Story: