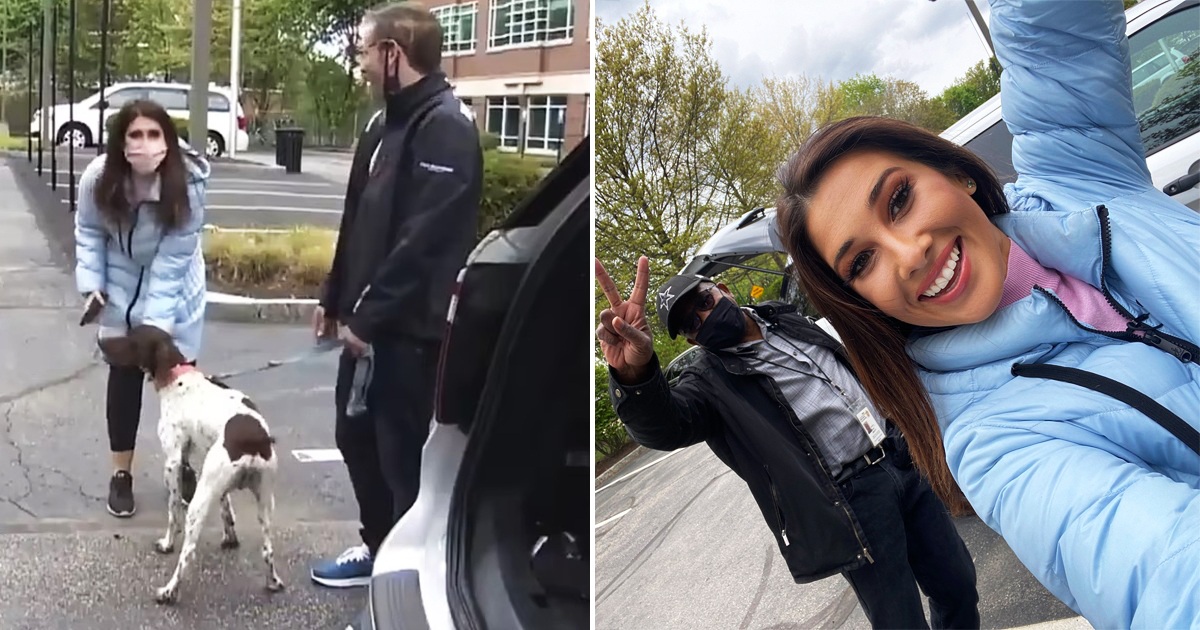 Titus, a 13-year-old German short-haired pointer on May 7th, got kidnapped from his owner’s vehicle. Owner Greg Siesczkiewicz hurriedly took to a TV station named WHDH to recover the lost dog, and Boston reporter Juliana Mazza decided to handle the dognapping story.

As luck would have it, Mazza was in Cambridge reporting about Titus when she observed a man walking a dog that appeared suspiciously like Titus. Seeing it’s was the lost dog, Mazza instantly called the police, who have eventually returned the beloved pet to its original owner.

Mazza was reporting live when she observed a man walking a dog that looks very same as lost Titus.

Today I was on the job looking into a stolen dog in #Cambridge. I NEVER could’ve imagined that my photog & I would be the ones to actually FIND him! Happy to report we stopped the suspect (whose been arrested) & helped get #Titus back to his dog dad AND IT’S ALL ON CAMERA pic.twitter.com/ICj5viviRg

The Cambridge police equally tweeted that an unknown suspect had broken into and entered a vehicle that was parked outside a biotechnology company on the Charles River. However, Mazza, who was with her photographer John Guice managed to stop the man and read the dog’s collar.

Cambridge police tweeted that an unknown suspect had broken into a vehicle parked on Charles River.

Yesterday at approximately 12:32p, an unknown suspect broke into and entered a vehicle that was parked at 620 Memorial Drive & stole a 13-month-old white German Short Haired Pointer out of the vehicle. The suspect was then observed walking the dog over the BU Bridge into Boston. pic.twitter.com/titQ0WvPMM

Titus is a white dog with spots, brown head and was wearing an orange color with his name on it. “The first thing I did is ask if I could pet the dog because I wanted to get down to the name tag,” Mazza told Inside Edition. In her news report shared on Twitter, Mazza claimed she started asking the man a few questions, and he admitted to taking the animal.

Seeing it’s was the lost dog, Mazza instantly called the police, and thankfully Titus has reunited with his owner.

Mazza, who was with her photographer John Guice managed to stop the man and read the dog’s collar.

“He was barking in the car. And I walked past the car, and I thought it was supposed to be a dog I was walking. It wasn’t kidnapping; it was just a simple mistake.” The man could be heard saying. At this point, twenty-four hours had passed, and clearly, the man didn’t return the dog, nor did he call the number on the dog tag.

Police identified the dog-napper as Kyle Gariepy. He has been arrested and charged with larceny of over $1200.

“You didn’t think to call the number on the tag? Mazza asked the man. He responded: “I did, but then I tried using one phone, the phone was broken and um, I just.” Police have since identified the dog-napper as Kyle Gariepy, 29, and has been arrested, charged with larceny of over $1200 and breaking into a vehicle to commit a felony.

“The dog was treated well, and I’m sorry that it ended this way. I am. And I feel bad.” Gariepy said.

Owner Greg has reunited with his dog, and indeed it was a tearful moment.

“I am glad that the person came back. And I am glad that you guys were there.” Greg reportedly stated. According to WHDH, Gariepy faced a judge on Monday and said he sorry for what happened. “The dog was treated well, and I’m sorry that it ended this way. I am. And I feel bad.” Gariepy added.