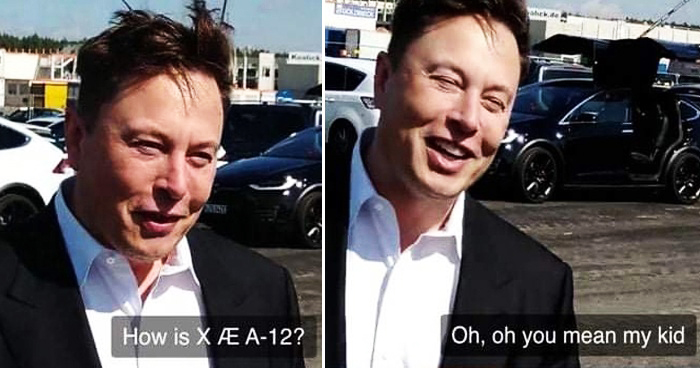 Elon Musk had an embarrassing momentary memory lapse and couldn’t remember his son’s name. The Billionaire had named his baby X Æ A-12 and we still haven’t been able to figure out what it means.

Musk was on a visit to inspect the progress of his Giga factory in Berlin when the press asked him how his child was.

The interviewer asks, “How’s X Æ A-12?” Musk seems genuinely confused for a minute. He asks the interviewer to repeat himself, and then he laughs and goes, “Oh, you mean

“Uh…I think next time I am going to bring him, maybe come back in a few months and bring him along,” he told the interviewer.

Musk and musician partner Grimes welcomed their first child together on May 4 and decided to name the baby boy X Æ A-12 Musk. This is pronounced ‘Ex Ash A Twelve’ with ‘Ex’ being the child’s first name

Musk And Musician Partner Grimes Welcomed Their First Child Together On May 4.

The laws dictate that only the 26 letters of the English alphabet, including hyphens, could be used.

The Couple Name The Baby Boy X Æ A-12 Musk

The Billionaire is scheduled to meet German Economy Minister Peter Altmaier earlier this month. The two will discuss Tesla’s plan to construct an electric car company just outside of Berlin.