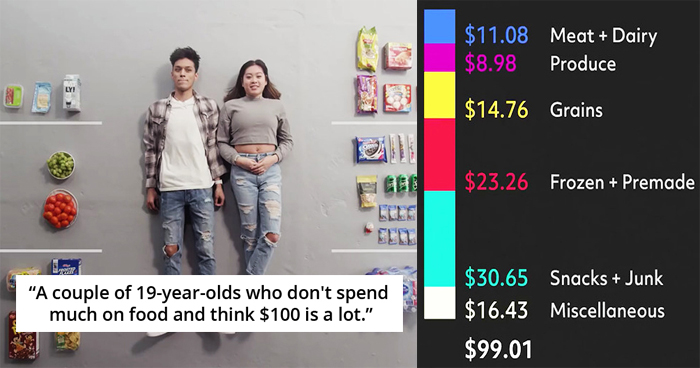 A single college student would spend $100 on groceries compared to a married mom will definitely differ a lot. When it comes to grocery shopping, youngsters tend to buy all the delicious and instant things. Then, there are the conscientious types who count their spending and don’t splurge on momentary indulgence.

CUT interviewed people of various backgrounds to share their lifestyle and how they prioritize their grocery. There’s a middle-class bartender who drinks six days a week, and then there’s a mom-of-three who spent half of her budget on diapers and baby needs.

Gertrude is paying attention to her diet. It’s ‘very important to eat the right things,’ and she eats out often for company.

$100 means food for a week and she’s always thinking practical.

Mick and Anthony, 36 and 46, are married, unemployed, starving artists. They met online and it was love at first email.

Karen, 19, lives with three other girls on campus and spend on pizza rolls most of the time. She personally thinks she’s not good with money.

A Strategic Communications student co-living with 8 other girls. Half of her budget is spent on groceries and doesn’t eat out with friends to save money, which kind of sucks.

She’s studying to become a medical assistant and spends a fourth of her $100 on baby formula. She also cooks for her family of three.

Having kids is crazy at times and there goes almost half the budget for kids’ needs.

Couple Brie and Ralen have a child together. The $100 at the cheapest store is barely enough!

Melina and Kevin, married with three kids and a dog. Food is the center of gathering for family and friends.

Couple who admits shopping experiences are the angriest moments they’ve ever had. Food is nothing more than fuel and cereal is delicious.

She’s trying to be an actor and attended college per her parents’ request. Eats out most of the time, doesn’t cook, and spend mostly on honeycombs that she love.

He collects social security for $1,110 a month, but it’s not nearly enough and puts him close to the poverty level.

64-year-old lunch lady at an elementary school lives alone and only eat out when invited by friends.

Komal, a 35-year-old married mom, and a software engineer. $100 is easily a month’s wage back in India.

Dylan is a private university student majoring in Finance. He loves cooking and spends under $200 a month to order food delivery.

Engaged couple Bernie and Rich tries to have dinner together whenever they can without TV.

A couple of 19-year-olds who often got told they eat like kids. They don’t spend much on food and think $100 is a lot.

Ex-marine engineer from the war, 98-year-old and living with daughter and her husband. He also raises chickens.

Making the most out of it with healthy groceries.

Ryan, a public university student, has a mini fridge in his room. He also has a toaster and would make pizza rolls.

Their priorities are Oreos and energy drinks… as food is just ‘a medium for community, family.’

Check out the original videos below!