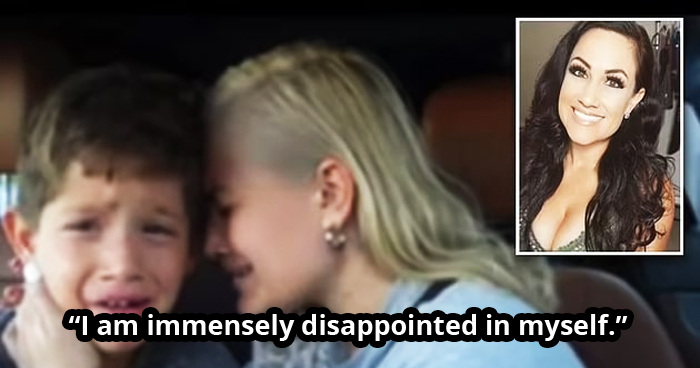 Famous YouTuber Caught Coaching Her Son, 9, To Cry Over Their Dying Dog

The beauty and lifestyle content creator, Jordan Cheyenne, has since 2013 been sharing vlogs about raising her son Christian as a single mother. However, a recent clip (now-deleted) that featured Jordan and her son hinged on their sick dog has been met with backlash on social media. As a result, the YouTuber has deleted her channel after mistakenly sharing an outtake where she coached her crying son on how to pose for a video thumbnail.

In a clip (now-deleted), Jordan Cheyenne, pictured here with her son, shared that her family’s puppy was diagnosed with a deadly illness.

Taking to YouTube, Jordan, in the clip titled: “We are heartbroken,” told her audiences that her family’s new puppy had been diagnosed with parvovirus. This condition can be fatal for unvaccinated dogs. When concluding, presumably when she intended to cut, she was noticed telling her son to pose for the camera as he wept. Jordan was heard saying: “Act like you’re crying.” Christian replied: “I am crying! I am actually, seriously sad.”

Christian, 9, was seen sobbing in the passenger seat as Jordan broke the news to her YouTube subscribers.

However, Jordan got busted for coaching Christian to wail in a certain way and told him how to place his hand.

this is so DISTURBING what is wrong with mom vloggers omfg pic.twitter.com/krUjM5Sfit

In response to the backlash, Jordan, who has since also branded herself as an Instagram growth coach, took to her website and claimed she would stop including her son in her YouTube videos. But then, the backlash didn’t stop. In a released statement to Insider, Jordan revealed she was pulling down her channel to focus on Christian’s health and wellbeing. “Getting completely offline, canceling all videos, and monetization and prioritizing my child is all I care about.” The statement read.

“Let them see your mouth. Look at the camera,” the vlogger told her son, Christian.

It added: “I’m disgusted and horrified at what I did, and there is absolutely no excuse. It’s terrible on so many levels. I love my child more than anything and will regret this moment forever.” While the clip has been deleted on Jordan’s channel, it has been re-uploaded to different social media platforms. But on the day of the incident, Jordan had uploaded an updated clip where she said: “I am immensely disappointed in myself.”

Jordan has since faced a heated backlash and, as a result, said Christian will never be on YouTube again.

“In the ending of the video, I was so emotionally out. I had Christian on my shoulder, and I was like, “come pose for the thumbnail with me” after the video. I shouldn’t have done that. I wish I could show us at the vet crying and being so emotional with everything that happened. But then, if did that, you know what people will say? Why are you filming your crying son? Why are you filming the emotional moment?” Jordan said, attempting to explain and excuse her behavior.

However, Twitter users have lambasted the behavior and questioned the morality of parenting Vlogs.

dude. the jordan cheyenne video is so disturbing and hard to watch. social media can be so dark.

Feels like when a parent uses a kid’s social to open credit cards. Taking advantage, disregarding that it will affect their adulthood.

looks like she accidentally posted it without editing the ending. she was probably supposed to trim it to when she covers the camera with her hand, everything after was probably her posing for a thumbnail

However, Jordan is the newest parenting YouTuber to be slammed. In 2020, Ruby and Kevin Franke of the channel 8 Passengers were accused of child abuse after their 15-Year-Old revealed he had been forced to sleep on a bean bag for months as punishment for pranking his brother. Similarly, YouTubers Ryan and Danielle got slammed for a creepy video prank where their daughter, 7, complained of cramps to her father and told him she’d had her first period.

The jordan cheyenne situation is gross, but all i can think about is that this is just one time that a family channel slipped and showed us what they do to their kids behind the scenes. i shudder to think what else happens (not just with this particular channel but all of them)

What really boils my piss is that she’s his mother. His parent. The one person on this planet tasked with protecting you. These family vloggers do anything but. Profiting off their own children’s trauma. My heart breaks for the people these children will grow up into.